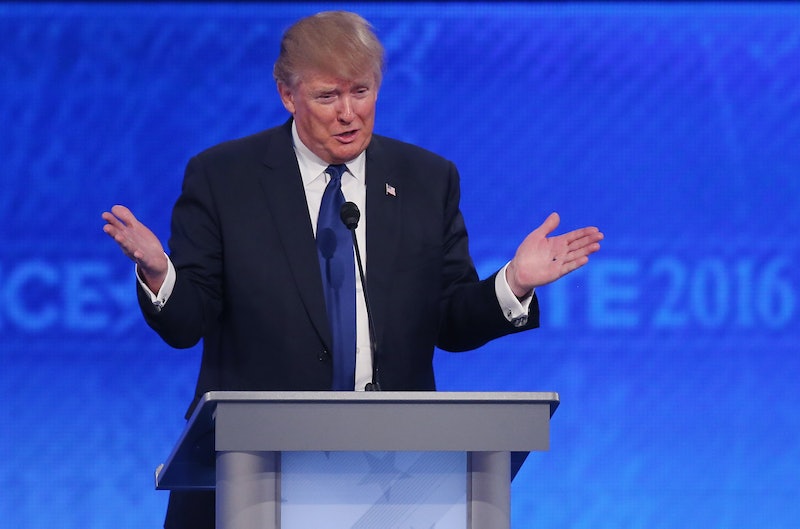 Sandwiched between the Iowa Caucus and the New Hampshire Primary, the seventh GOP debate provided a much needed platform for remaining prominent Republican presidential hopefuls. The Saturday night event marked a return of sorts for GOP frontrunner Donald Trump. The Donald missed the previous debate and appeared to pay dearly for it, finishing in second place behind Ted Cruz in the Iowa Caucus. Trump vowed to never miss an opportunity like that again. His performance at St. Anselm College in Manchester, New Hampshire was typical Trump, however. Donald Trump's closing statement was bombastic, brash, and shows the candidate has no signs of stopping his campaign anytime soon.

Trump was in peak form during the debate, his bombastic responses and feud with fellow candidate Jeb Bush showing a surprisingly combative candidate. He answered questions from moderators David Muir and Martha Raddatz as if giving a business pitch, steadily appearing to stay on topic despite the posturing. Issues of foreign policy and immigration reform were heavily touched upon during the debate and the real estate mogul appeared steadfast in his views. Such a domineering presence certainly changed the seventh GOP debate and the Donald clearly missed his front and center status. He summed up his return with a particularly bombastic closing statement.

Though ridiculous, combative, and perpetuating a conspiracy theory that Cruz allegedly stole his Iowa Caucus win, Trump's statements show a candidate clearly committed to his campaign. What Trump's closing statement lacks in larger substance, he attempts to make up for with what may become his brand new slogan. The mantra of "we will win" may very well usurp his "Make America Great Again" slogan and feels incredibly on message for the candidate. His victorious message certainly won't be the last you hear of the frontrunner.