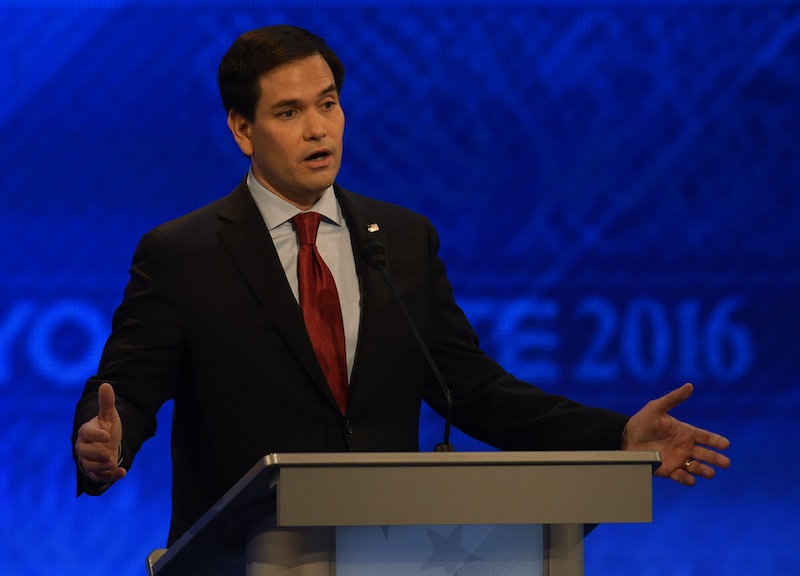 Marco Rubio debated the other six Republican presidential candidates who ranked the best in recent polls and the Iowa caucuses just days before on Saturday night. Rubio stayed true to his usual attacks of his main opponents (Donald Trump and Ted Cruz) and his conservative agendas on immigration, foreign policy, and the economy. Rubio's closing statements at the GOP debate focused on his kids and America's future generations.

Rubio established himself as a viable GOP nominee when he placed third in Iowa, only one point below Trump, who's consistently polled as the top candidate in recent months. Pegged as the establishment candidate, Rubio wasn't expected to win Iowa, but finishing in the top three gave him a giant boost going into Saturday's debate. Now that his ability to take on Trump has been validated by voters, he had even more confidence and ABC News' moderators whirled a lot of questions his way. In the most recent New Hampshire Republican polls, Rubio placed second, only 10 points under Trump. Needless to say, he needed a strong performance on Saturday to continue his post-Iowa momentum heading into the New Hampshire primary, and Rubio's closing statements perfectly summed up why he wants to be president.

You know, this week I had the great pleasure of having my kids join me on the campaign trail — I hadn't seen them in a while. And it was great to have them alongside me, but the most important part of it is that it once again reminded me of what's at stake. Here in New Hampshire, in less than 72 hours, we are literally deciding what kind of country we will be like when they're my age, what kind of country they will be able to raise their families in. And that's why I'm asking you for your vote. You vote for me and we will unite this party. We will grow the conservative movement. We will defeat Hillary Clinton, and we will leave our children what our parents left us — the single greatest nation in the history of all mankind. Thank you.

Rubio clearly has his mind on the future.