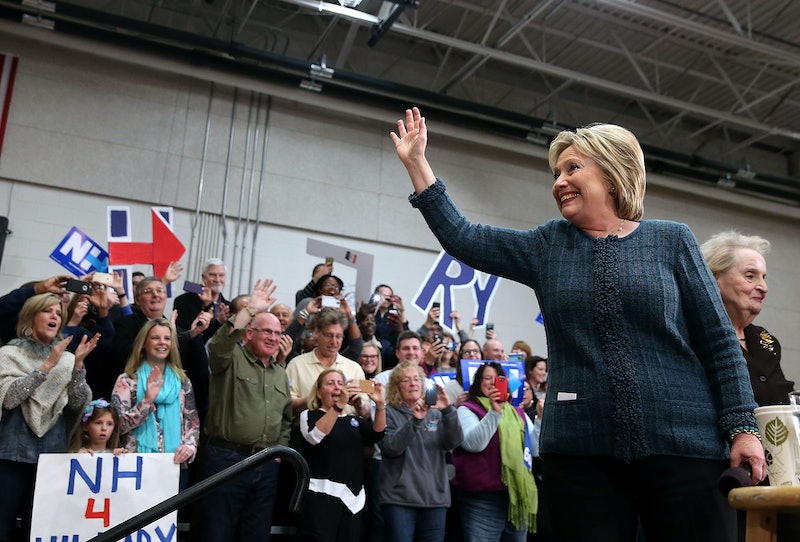 On Saturday, the seven leading Republican candidates gathered in Manchester, New Hampshire, to debate one last time before the state's much-anticipated presidential primary on Tuesday. Donald Trump took the center podium thanks to his lead in the polls, but the stakes remained high considering that it was Cruz — not Trump — who won the Iowa caucus earlier this week. Although she wasn't in the room, Democratic candidate and former Secretary of State Hillary Clinton tweeted about the GOP debate, making sure that her voice was heard on a night when all eyes were on the opposing party.

Clinton has a lot on the line when it comes to the New Hampshire primary, also. She narrowly won the Democratic caucus in Iowa on Monday, beating Vermont Senator Bernie Sanders by just a fraction of a percentage point. She is expected to have an even tougher time beating Sanders in New Hampshire, particularly since he has so much support just across the state's border in Vermont.

While the GOP candidates debated at Saint Anselm College, Clinton held a rally of her own elsewhere in New Hampshire. She — or at least her campaign — was certainly paying attention to the debate, though, as she wasted no time poking fun at the drama and getting her two cents in.

After kicking the night off with jokes linked to Clinton's appearances on The Tonight Show With Jimmy Fallon and Fallon's impersonation of Trump on the same show, Clinton began to focus on the candidates' responses to specific questions and issues. She didn't lose any of the humor, though. Let's just say that GIFs were perhaps Clinton's biggest ally on Saturday night.

Clinton ended the night with an upbeat message and a GIF that she didn't even need to be in:

If Clinton has her way, she'll soon be going head-to-head with one of the candidates on the debate stage on Saturday night. She doesn't seem to care who she goes up against, so long as she gets to take on the challenge. She didn't have too much to say during the debate — at least not according to her Twitter — but what she did say injected the humor that the night so desperately needed. From awkward moments to hard-hitting battles, Saturday's debate seemed as serious as the stakes were high. Both Clinton and her Republican counterparts will be awaiting the results of Tuesday's New Hampshire primary to see if their messages really do connect with voters.