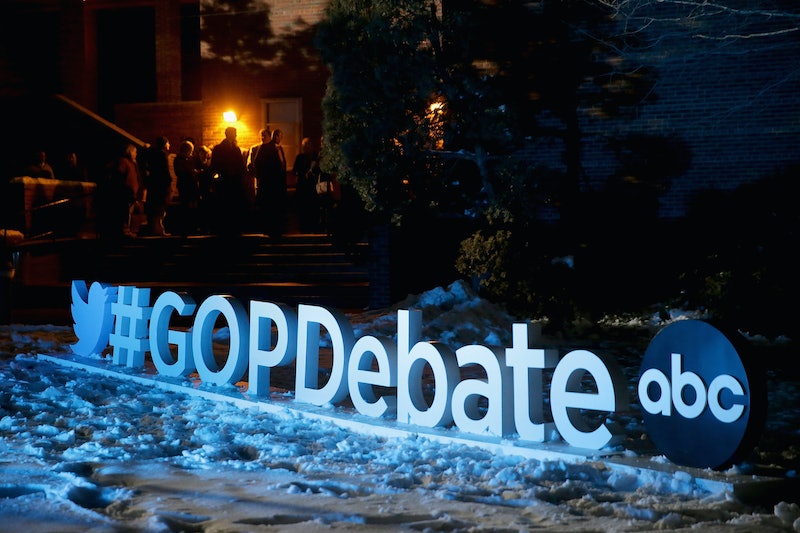 The eighth and final GOP debate before the New Hampshire primary took place on Saturday night. Seven candidates appeared onstage at St. Anselm College for the lone debate of the evening, marking the first time that an undercard did not take place this election season. The event also marked the return of Republican frontrunner Donald Trump, who had sat out the last debate in protest of Fox News and journalist Megyn Kelly. Needless to say, the debate was filled with verve and plenty of surprises. Viewers also saw a breakdown of sorts, with prominent candidate Marco Rubio severely faltering. The one GOP debate tweet that sums up the night perfectly captures this.

Rubio was the unabashed loser of the debate, clashing with Chris Christie about political experience and continuing to play on the "memorized 25-second speeches" that Christie continues to attack. There were plenty of awkward moments during the event right down to how the debate began with Ben Carson refusing to walk out onstage and having to be motioned to and called out before he began moving. There were also loads of cringe-worthy moments between Trump and Jeb Bush as the two clashed on eminent domain. Nonetheless, no single narrative dominated quite like that of Robo-Rubio.

Rubio may not have earned any acclaim for his GOP debate performance but he certainly got people talking. According to analytics from Twitter, the Florida senator received the second most amount of followers and was talked about the second most, just slightly behind Trump on both fronts. Many of those conversations referenced the more disappointing moments of Rubio's performance, such as when he repeated the same perplexing criticism of President Obama on three different occasions, often appearing robotic and overly rehearsed. Rubio had stated that the president knows "exactly what he's doing" in that he's attempting to turn the United States into a place "just like everywhere else in the world."

The statement initially came off as an incredibly weak critique; a puzzling scare tactic of sorts that did little to further the candidate's messagae during the debate. Its repeated use only managed to bolster Christie's claim that Rubio had been too scripted. A rather tone deaf and clearly off-script joke about Joe Biden being 1,000 years old fared similarly poorly. Many are seeing this debate as Rubio's "Dean Scream," referencing former Vermont governor and Democratic candidate Howard Deans' infamous outburst following the 2004 Iowa Caucus. The upcoming New Hampshire Primary on Tuesday may very well establish whether that claim is true. For all the strong moments that did occur during the GOP debate, it's Rubio's failings that ultimately reigned supreme.