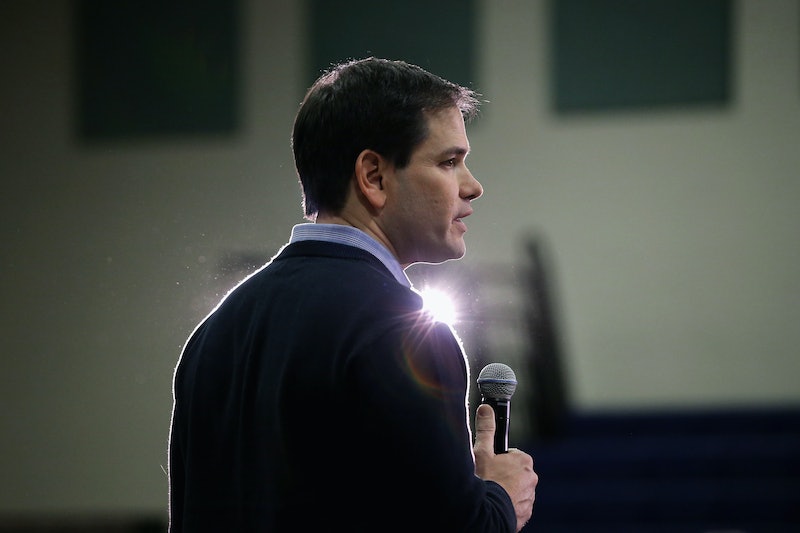 The eighth GOP debate was a fiery affair that saw two candidates face off almost immediately. Moderator David Muir asked Florida Sen. Marco Rubio about his accomplishments, leading into the question with a quote from fellow candidate Chris Christie questioning Rubio's experience. The New Jersey governor was making the case that his added experience overseeing a state made him more qualified than Rubio. Rubio responded by listing his accomplishments while serving the state of Florida, including passing the Girls Count Act and protecting his constituents from eminent domain. Oh, and Marco Rubio made a terrible Joe Biden joke in the process.

Joking that the vice president has been around "thousands of years," Rubio used the jab as a way to explain why experience doesn't always equate to mastery. "If the presidency becomes electing the people who have been in Congress the longest, we should rally around Joe Biden," Rubio said dryly. "He's been around a thousand years and passed hundreds of bills..." Needless to say, the joke didn't really go over that well, appearing to make more of a case for Biden's candidacy than that of Rubio.

Outside of experience, Christie's consistent criticism of Rubio is an alleged scripted to response to the issues. Christie's political persona is built on bluntness and his campaign slogan is "telling it like it is," thus it's unsurprising that the presidential hopeful take aim at a potentially more polished candidate. The New Jersey governor recently released a playlist of sorts of Rubio's "scripted" responses. It's a rather ridiculous move but then again, former candidate Mike Huckabee did drop a faux Adele track leading up to the Iowa Caucus.

Rubio's way of standing out and going off script was apparently trying to evoke all the bad qualities of Biden. The move instead appeared to both baffle and backfire. While there are plenty of ways to play off a lack of experience being something beneficial in the Republican race, it does little good to focus on fellow politicians in high positions whose voting records and work span volumes compared to the likes of newcomers. What followed was a highly heated exchange between Rubio and Christie. That battle appears to show no signs of slowing down. Perhaps Rubio should've called on Biden before the debate. In his thousand or more years of wisdom, surely he could help the candidate as he fumbles his way through another debate.