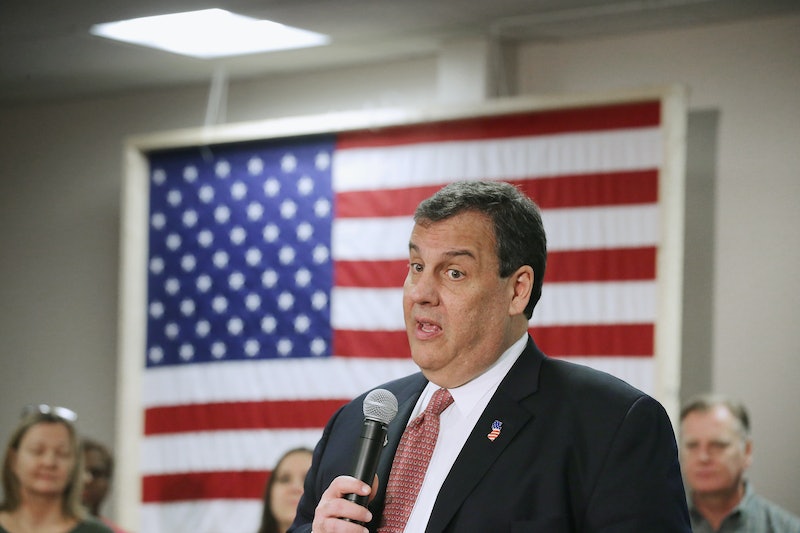 Texas Sen. Ted Cruz may have won the Iowa caucus on Monday, but New Jersey Gov. Chris Christie won Saturday's GOP debate in New Hampshire. The debate focused on everything from healthcare and immigration to North Korea's launch of an intercontinental ballistic missile just before the debate. The debate was not only the first opportunity for candidate to address a wide audience of voters after the Iowa caucus, but it was also the last opportunity for the candidates to address that audience before Tuesday's New Hampshire primary.

Saturday's debate, hosted by ABC News and The Independent Journal Review, was held at Saint Anselm College in Manchester, New Hampshire. Things got off to an awkward start when retired neurosurgeon Ben Carson refused to walk out to his podium at the assigned time, causing a tense entrance for him and others. Things didn't get any less tense when the debate started, as Cruz and Carson went back and forth over the drama that surrounded their campaigns earlier in the week, when the Cruz campaign seemed to declare that Carson was dropping out of the race. Similarly, Florida Sen. Marco Rubio and Christie went head-to-head several times, with Christie attacking Rubio for what he sees as using the same speeches over and over.

Christie also implicated Rubio's lack of attendance at congressional votes. "You have not been involved in a consequential decision, in which you had to be held accountable," Christie said to Rubio. "You just haven't."

Christie's gubernatorial argument didn't just benefit his performance in the debate. Across the board, the governors on stage in New Hampshire — Christie, Ohio Gov. John Kasich and former Florida Gov. Jeb Bush — seemed to have a better night than usual at Saturday's debate. This differentiation between governors and senators may come at an important time: The so-called members of the "establishment" will need to distinguish themselves from each other if they hope to have any chance of beating the non-establishment candidates in the primaries.

Christie has maintained an argumentative tone throughout the campaign. On Saturday, it seemed that his tone finally resonated. What's interesting, though, is this: In addition to criticizing Rubio for his job as a senator, Christie also called Rubio out for using the same rehearsed messages over and over. That's a pretty common tactic for candidates, who are expected to speak all day every day for several months on the campaign trail.

Sure, all voters probably want to see a candidate deliver responses as genuinely and non-rehearsed as possible. That's part of Donald Trump's success, isn't it? But Christie probably doesn't have as much room to talk here as he'd like you to think. In virtually every debate, Christie has told the story about how he took office as New Jersey's governor on September 10, 2001, the day before the horrific attacks on the United States. There's no doubt that he was probably more affected by the 9/11 attacks than most governors in the U.S., since his state borders New York, where the Twin Towers fell. But by telling this story over and over, Christie is committing the very same campaign crime that he's accusing Rubio of.

Nonetheless, Christie deserves most of the credit for making Saturday's debate interesting. He hit Rubio hard, at a time when Rubio has seen tremendous success in the polls and in the Iowa caucus results. Not to mention, he had a couple pro-women zingers in his debate responses, also. Still, Christie will have a lot of work to do if he hopes to pull out a first-place finish in New Hampshire on Tuesday.