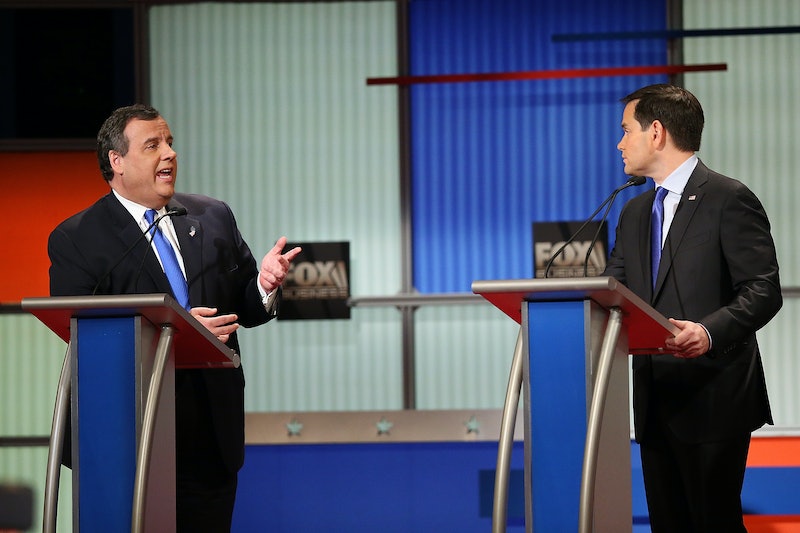 Heading into the GOP debate on Saturday night, there were a lot of potential showdowns people were waiting to see ― will Donald Trump tear into Ted Cruz? Will Marco Rubio and Jeb Bush rattle sabers again? Will John Kasich, well, mix it up with anyone? Well, as it turns out, one of the hottest rivalries of the night turned out to be one you might not have expected: Chris Christie is roasting Marco Rubio in the GOP debate.

Coming out of Iowa, the primary arithmetic seemed to simplify a great deal. Basically, it seems like it's all going to boil down to the trio of Cruz, Trump, and Rubio, the top-three Iowa finishers who're also leading in the New Hampshire polls. This means each and every one of them had a lot to lose, but it also meant that the candidates in the lower-rung ― your Jeb Bushes, your Ben Carsons, and yes, your Chris Christies ― had maybe their last, best chance to gain something big.

And perhaps nobody came out swinging quite as hard as Christie did against Rubio. It makes sense, since both of them are ostensibly competing in the so-called establishment lane of the party ― even though Rubio, by conventional standards, is far more conservative than your average establishment pick.

The video embedded above is aptly titled ― his back-and-forth scrapes with Christie tonight really might be the worst moments he's suffered in his campaign, because he seemed utterly unable to defend himself. The first criticism from Christie was that Rubio's list of career accomplishments was, let's say, a little thin.

You have not been involved in a consequential decision, in which you had to be held accountable. You just simply haven't.

Even a criticism as straightforward and unapologetic as that paled in comparison to what Rubio had coming, however. The real disaster came when Christie accused Rubio of communicating largely in short, easily digestible soundbytes. Well, actually, that makes it sound a little too soft ― here's how he put it.

Oof. To make matters worse, Rubio went on to immediately prove Christie's point ― instead of responding directly to such a forward attack, he fell right back into the talking point he'd been using earlier, giving Christie another opening to taunt him: "There it is! The memorized 25-second speech."

Rubio did try to fight back in his own right, and in pretty aggressive terms, insisting that Christie had to be "shamed" in order to return home to New Jersey during the events of Winter Storm Jonas. But the attacks didn't seem to go over very well, at least not inside the debate hall, as he was met with a chorus of boos.

And more to the point, he totally failed to blunt Christie's momentum ― no matter what else happens, people are going to remember those tense moments with Christie, when he looked completely caught off-guard. Suffice to say, Saturday night simply can't end fast enough for Marco Rubio.