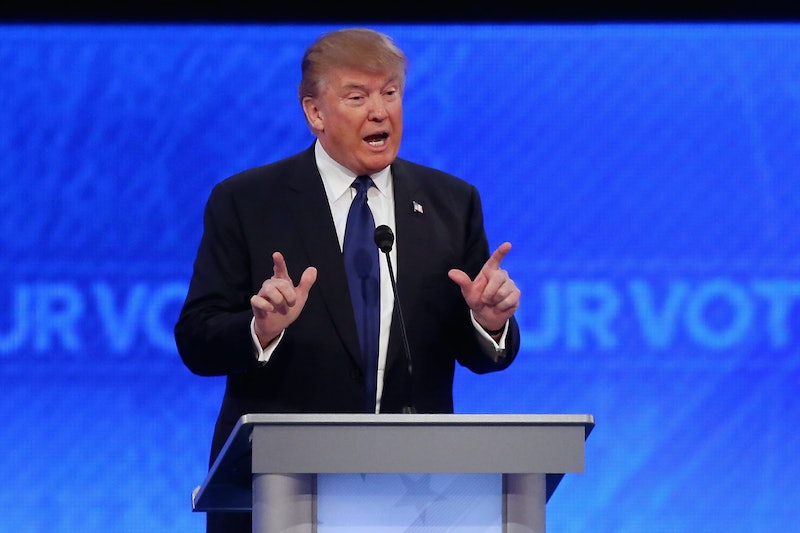 As the top seven Republican candidates went head to head on the debate stage Saturday night, Americans watching from home noticed something very different about the candidate standing at the center podium — Donald Trump got a haircut before the GOP debate. The real estate magnate is known for his epic blonde combover, so viewers realized right away that something had changed. Unfortunately, the essence of Trump's hairstyle wasn't altered, but it was flatter than normal.

Apparently, Trump got a haircut before taking the stage Saturday night, after his brief hiatus sitting out the last GOP presidential forum. Whereas his hair is usually slightly longer and poofier on the sides, it appeared much shorter. The candidate's signature combover was still there in all its glory, but also looked a little flatter than normal. Is Trump trying to tone down his 'do to look more presidential or was it just time for a trim? Either way, people recognized the difference right away, proving just how much of a celebrity Trump's hair has become. It would have caused a lot more chatter had he done away with the combover altogether or died his hair a brighter shade of blonde, but his slight haircut still made a big difference.

After missing the last debate and coming in second place in the Iowa caucuses earlier this week, Trump desperately needed to look presidential and give a strong performance. Regardless of what came out of his mouth or how enthusiastically he waved his arms around, his hair was on point.

Trump's hair is so popular (er, unpopular) that it really needs a podium of its own at GOP debates. I would love to hear its stances on dealing with ISIS and creating jobs, as well as what it's like to live on top of Trump's head.