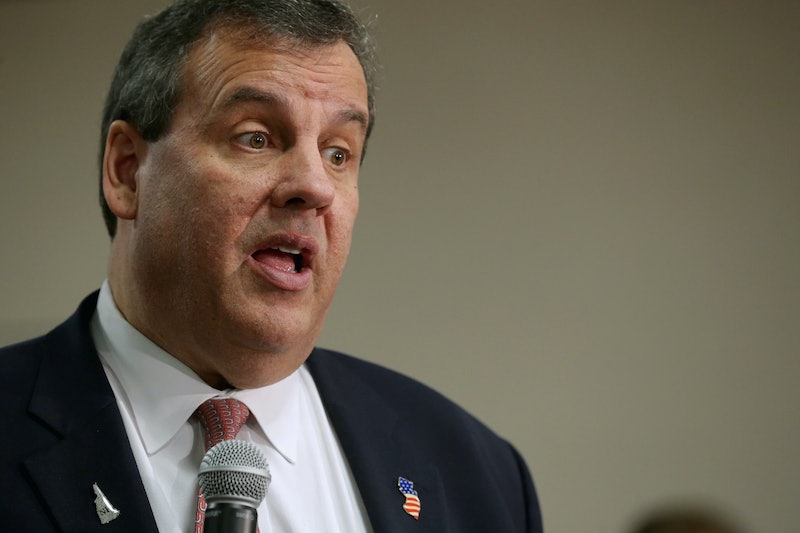 There's been a lot of talk lately about the role of women in the military. Last year, women graduated from the U.S. Army's Ranger School for the first time, and the military opened combat units to women. In discussing the idea that women should have to register for the military draft during Saturday's GOP debate, New Jersey Gov. Chris Christie used a touching story about his daughters to illustrate his pro-women stance on the issue — but he may have left some of the question unanswered.

When asked if he thought that women should have to register for selective service (a.k.a. the draft) like men do when they turn 18 years old, Christie evoked his two daughters. He said that he and his wife raised their daughters to understand that their worth and their abilities do not come from what the outside world says, but rather from what is inside of them. He was the only candidate to answer the question by describing his role as a father, and his statement was surely welcome support for the women who have worked hard to earn the respect of their male counterparts in the military. However, he seemed to miss the point of the question.

In using the story of his daughters, Christie made it clear that women can do whatever they want to do, which is certainly empowering. The problem is that he answered the question, "What should women be allowed to do?" as opposed to the question he was asked, which was in paraphrased form, "What should women be compelled to do?" Signing up for selective service is not voluntary for men, and the moderators did not imply that it would be voluntary for women in their questions.

Christie made another interesting pro-women's rights statement not long after this discussion of the military. In talking about abortion, Christie said that women who are victims of rape or incest should be allowed to abort their fetus. That's not a shocking argument by any means — he's certainly not the only conservative to call for an allowance of abortion in cases of rape or incest. However, it's not often that that distinction is made during primetime debates among a group of men battling it out to see who is the most conservative of them all.

Ultimately, Christie's pro-women's rights statements may have contributed to a well-rounded performance throughout the night. He had many memorable moments at the GOP debate. Now, it's just a matter of seeing how these moments translate into votes during Tuesday's New Hampshire primary.