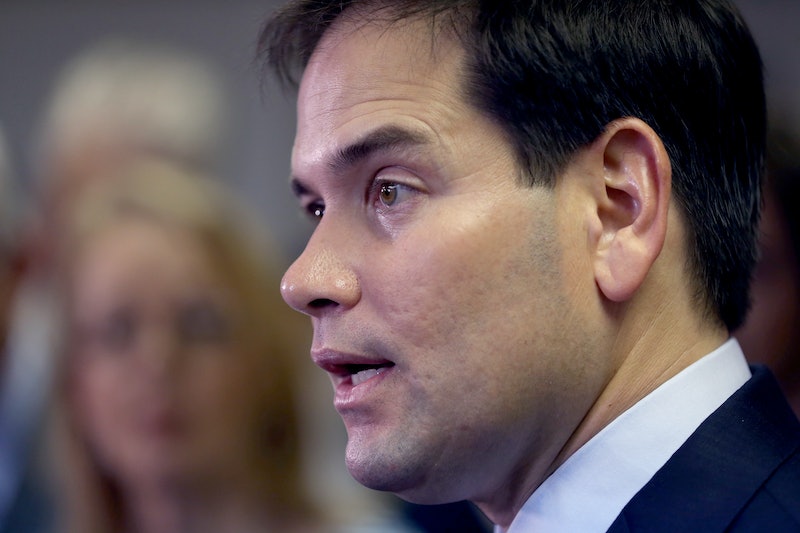 At a Republican debate not too long ago, all eyes were on veterans — not because of the conversation at the debate, but because of an event going on down the street to raise money for veterans' groups, organized by debate boycotter Donald Trump. On Saturday night, the GOP candidates, Trump included, met again for a debate. This time, however, it was Marco Rubio and his big brother, Mario, who might have owned the debate about veterans.

When the topic of veterans came up at Saturday's debate in Manchester, New Hampshire, the Florida senator told a story about his brother, the lesser-known Rubio. Rubio explained that his brother was a veteran of the U.S. Army's special forces — a Green Beret, as members of that group are often called. According to Rubio's story, his brother had lost his two front teeth while jumping out of an airplane during his service. Decades later, his brother is still waiting for the dental work that he needs done.

The senator used his brother's story on Saturday night to highlight the reform needed in dealing with veterans' healthcare. While Rubio made a good point, he did receive some backlash on Twitter for the way in which his brother's story came across. Nonetheless, it was a learning opportunity for members of the audience who hadn't previously heard the oldest Rubio's story.

Mario is in his 60s and now works for the city of Jacksonville, where he lives. He served in the army from 1968 to 1971, during the Vietnam War. As it turns out, Mario's younger brother has told his story on the campaign trail before. Mario has even joined his little brother at these campaign events, including one in Iowa in December. Marco delivered similar remarks at that time that he did during Saturday night's debate:

Mario is going through the exact same bureaucratic nightmare every other veteran in his situation has to go through. And like so many of them, he will tell you how confusing it has been, how even the forms he has to fill out seem almost intentionally complicated.

Despite the relevant story, Rubio received some criticism on Twitter for highlighting what many see as a very minor war-related injury:

Sure, losing two teeth seems like a pretty minor outcome of going to war. But then again, the extent of his brother's injury wasn't necessarily Rubio's point. His point was that a person who served his or her country shouldn't have to wait years — decades, even — for a claim to work its way through the system. With that point in mind, there's perhaps no story more relevant for Rubio than that of his own brother.