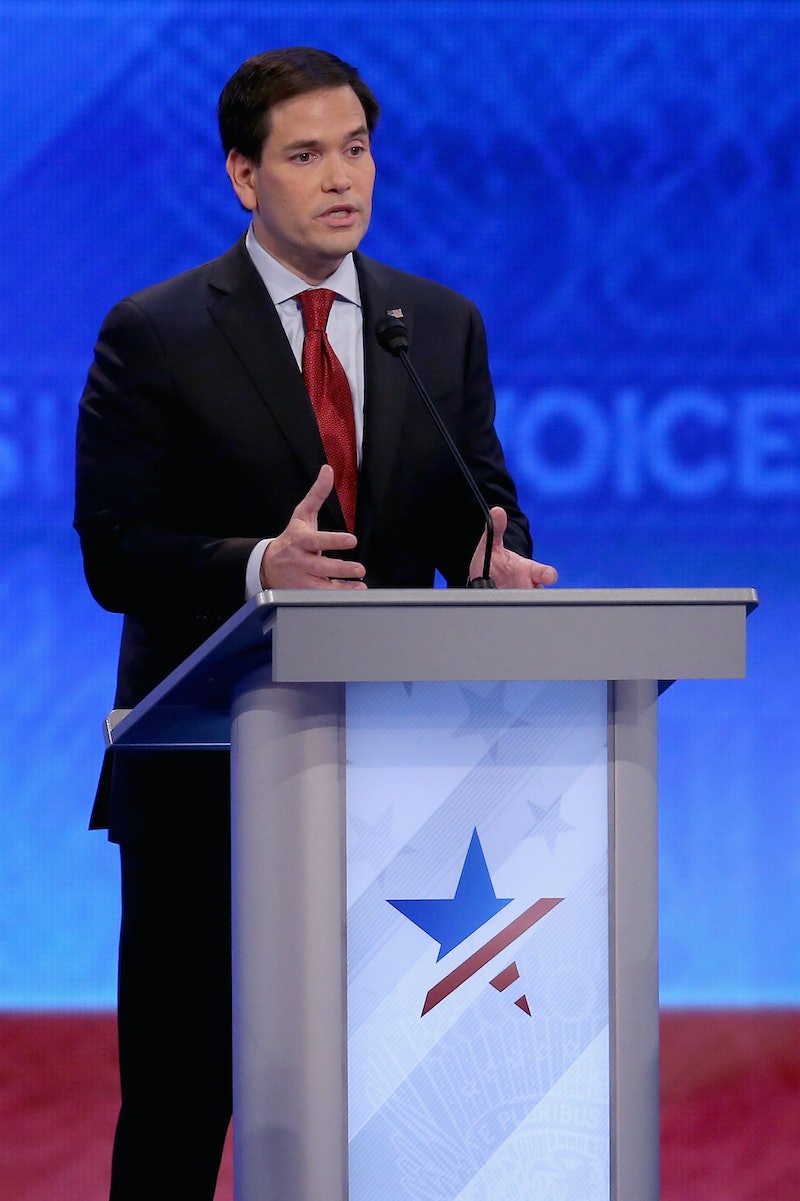 Well, that's another one down! The eighth Republican presidential debate is over and done with, which means we've only got three to go before the general election season kicks off. And out of all of them so far, the stakes were undeniably at their height on Saturday night ― it was the last chance any of the candidates had to score a few last-minute points with New Hampshire voters, and to answer for any awkward moments they've had on the trail so far. For example: Marco Rubio's criticism of Obama's mosque visit came up, although the Florida senator's response was less than inspiring.

Actually, it was downright misleading, a blatant instance of Rubio chattering around a question without ever truly answering it. It's not hard to see why he'd have trouble responding, in fairness ― his statement at a New Hampshire campaign event on Wednesday that Obama's recent visit to a mosque was "pitting people against each other," and "basically implying that America is discriminating against Muslims," was a prime example of casual, taken for granted anti-Muslim bigotry.

But even if you'd assumed that wouldn't be so out-of-place in one of these heavily vitriolic Republican showdowns, Rubio didn't seem to agree ― he wanted no part of actually discussing what he said, or whether he truly believed that Obama simply visiting a Muslim house of worship was improper.

Here's what Rubio actually said earlier this week, as detailed by Jenna Johnson and Sean Sullivan of the Washington Post.

I’m tired of being divided against each other for political reasons like this president’s done. Always pitting people against each other. Always. Look at today – he gave a speech at a mosque. Oh, you know, basically implying that America is discriminating against Muslims. Of course there’s going to be discrimination in America of every kind. But the bigger issue is radical Islam. And by the way, radical Islam poses a threat to Muslims themselves. But again, it’s this constant pitting people against each other -- that I can’t stand that. It’s hurting our country badly.

If you think that looks bad when read off a page, wait until you hear what it actually sounds like. As someone who's spent a lot of time now listening to Rubio speak, it's kind of rare to hear him sound halfway genuine when he's stressing something verbally ― a lot of times, like Chris Christie pointed out during the debate, he sounds extremely scripted and contrived when he's trying to come across as earnest. But in this case, his irritation sounds surprisingly sincere.

So how did he decide to respond, when asked about this by ABC News' David Muir? Did he walk it back? Well, no ― he kind of walked around it, never really addressing the core offense of what he'd said. Muir asked Rubio point-blank whether there was any difference between former president George W. Bush visiting a mosque after 9/11 and Obama visiting one now, and whether he'd visit one if he were elected. Here's what Rubio said in response:

I would. But that's not the issue. My problem with what he did is that he continues to put out this fiction that there's widespread, systematic discrimination against Muslim Americans. First of all, let's recognize this: if you go to a national cemetery in this country you will see Stars of David, and crosses, but you will also see crescent moons. There are brave men and women who happen to be Muslim Americans who are serving this country in uniform, and who have died in the service of this country. And we recognize that, and we honor that.

But by the same token, we face a very significant threat of homegrown violent extremism. We need to have strong, positive relationships in the Islamic communities in this country so they will identify and report this activity, especially mosques, for example that are participating not just in hate speech, but inciting violence, and taking acts against us. And I do believe it is important also to recognize, you want to talk about religious discrimination in America? Well, I don't think Barack Obama is being sued by any Islamic groups, but he is being sued by the Little Sisters of the Poor. We are facing in this country, Christian groups, and groups that hold traditional values, who feel and in fact are being discriminated against by the laws of this country, that try to force them to violate their conscience.

You may note that nowhere in that answer did he mention why it'd be different for him to visit a mosque than Obama or Bush, nor why Obama's visit implies widespread discrimination against Muslims and Bush's (presumably) doesn't. It's also worth noting that in his post-9/11 remarks to the Islamic Center of Washington, D.C., Bush said the following:

America counts millions of Muslims amongst our citizens, and Muslims make an incredibly valuable contribution to our country. Muslims are doctors, lawyers, law professors, members of the military, entrepreneurs, shopkeepers, moms and dads. And they need to be treated with respect. In our anger and emotion, our fellow Americans must treat each other with respect. Women who cover their heads in this country must feel comfortable going outside their homes. Moms who wear cover must be not intimidated in America. That's not the America I know. That's not the America I value. I've been told that some fear to leave; some don't want to go shopping for their families; some don't want to go about their ordinary daily routines because, by wearing cover, they're afraid they'll be intimidated. That should not and that will not stand in America.

What a bleeding heart, huh? How awful of him to even suggest that Muslims might be stigmatized or discriminated against! It's downright un-American, or at least, that's what Rubio would have to think if he wanted to be consistent about this.

It would've been nice if he'd just copped an apology, a light mea culpa, or had even claimed (impossible as it would be) that he was taken out-of-context, the way so many politicians do. But instead, he decided to just tap dance around it all. There's no telling for sure if this moment will hurt him going forward, but considering what the rest of his debate looked like, it couldn't have helped.