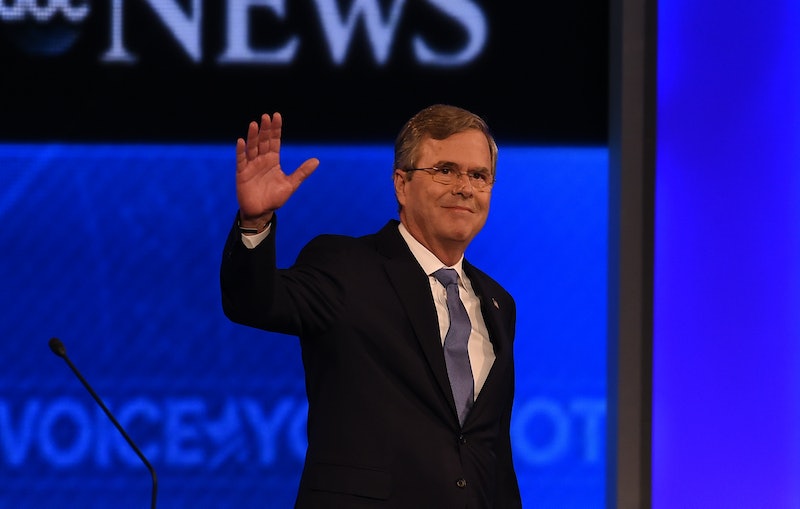 For anyone who believes that women should have the right to choose how, when, and if to have kids, hearing the Republican presidential candidates debate the topic of abortion Saturday night probably caused your face to severely cringe. All of the men on stage oppose a woman's right to choose, but what's most troubling is that Jeb Bush's abortion views are the most moderate among his opponents. Bush's stance on abortion is still very conservative, it just happens to look less severe when compared to other Republicans' even more extreme stances.

During Saturday's GOP debate in New Hampshire, Bush explained that while he was the governor of Florida, the state banned partial-birth abortions, required parents be notified when teenagers seek abortions, and funded pregnancy crisis centers. "So I'm pro life, but I believe there should be exceptions: rape, incest and when the life of the mother is in danger," Bush said. "And so, that belief, and my consistency on this, makes me, I think, poised to be in the right place, the sweet spot for a Republican nominee." Essentially, he was saying that he would make the best GOP nominee because of his more moderate views on abortion, and he isn't entirely wrong — Americans who don't want to completely ban abortion are more likely to vote for a candidate that supports exemptions.

Bush's statements followed Rubio's, who vehemently opposes abortion in all cases except to save the life of the mother. "On the one hand is the right of a woman to choose what to do with her body which is a real right," Rubio said during the debate. "And on the other hand is the right of an unborn human child to live. And they're in conflict. And as a policy maker, I must choose which one of these two sides takes precedence. And I have chosen to err on the side of life." Though they didn't speak on the issue, Ted Cruz and Ben Carson want to ban abortion altogether.

However, Bush wanting to prohibit abortion except for in instances of rape, incest, or risk to the mother's life is still a very anti-choice position and would keep most women from ending an unwanted pregnancy. It seems, at least to me, that a true middle ground between advocating for criminalizing all abortions and making abortion widely accessible would be to stick to Roe v. Wade's determination that abortion should be legal up to when a fetus is viable (usually about 24 weeks). Bush is only able to claim he's more relevant to socially-minded young voters on the issue because his opponents have such extreme abortion agendas.

Rather than becoming slightly more progressive, the Republicans running for office have more conservative views on women's reproductive lives than in past elections, which makes Bush appear to be a glimmer of GOP pro-choice hope. Don't be fooled though, he still wants to severely limit women's right to choose.