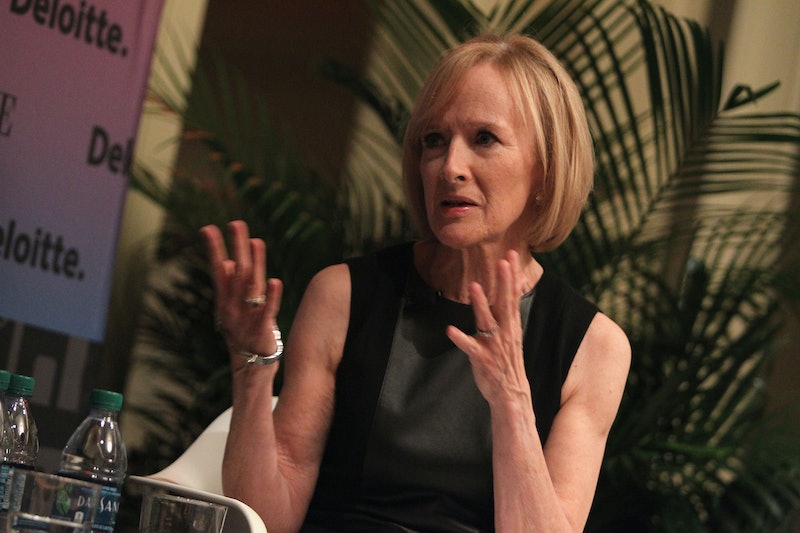 When it comes to politics, there's probably little that PBS NewsHour anchor Judy Woodruff hasn't seen. She's covered political campaigns, presidential activities, and the like for just about all the major networks and outlets you could think of. On Thursday, Judy Woodruff will moderate the PBS Democratic debate, a position she's been in before, along with her PBS co-anchor, Gwen Ifill.

Currently, Woodruff serves as co-anchor and managing editor of NewsHour, an evening news program produced by the public broadcasting network. Before that, Woodruff worked as an anchor and senior correspondent for CNN, as chief White House correspondent for NBC, and in other roles for PBS. Throughout it all, Woodruff has remained a tireless advocate for the issues that matter to her personally, including women in the media and families dealing with disabilities.

As an early pioneer among women in television news, Woodruff knows firsthand the struggle that women have faced in the professional world. As the mother of a son with spina bifida, she also knows what it's like to care for a family member with a rare condition. Not to mention, she's a pretty impressive example of a working mother who has been able to balance both roles throughout a stellar career.

Along with a group of like-minded female colleagues, Woodruff founded the International Women's Media Foundation (IWMF), which celebrated its 25th anniversary in 2015. The foundation works to propel women forward in the media by providing training, recognition, and support to female journalists. Today, the IWMF is led by a Board of Directors that includes recognizable names like CNN anchor Christiane Amanpour, ABC News anchor George Stephanopoulos, and NBC News' Anne Curry.

As if her work with the media weren't enough, Woodruff is also married to a newsman, Al Hunt of Bloomberg News. Together, they have three children. Their son Jeffrey was born with a mild case of spina bifida, a rare condition that is manifested by an incomplete closure of the backbone. Fortunately, Jeffrey had as normal a childhood as possible: He was even able to do things like skiing and swimming. When he was 16, though, he was left brain damaged and more severely disabled after a surgery. Even still, he was able to graduate from college and live independently as an adult thanks to the support of his family. As a result of her experience, Woodruff has worked, along with her husband, to raise millions of dollars for spina bifida research and to counsel other parents in similar situations.

As a working mother and an advocate for others, Woodruff has set an example for women not just in media, but across all fields. It's an example that even some of the most respected names in her field recognize. In the words of NBC News's Andrea Mitchell, "She is the woman who reported from the White House for NBC Nightly News one evening, gave birth that night and was celebrated with her firstborn, Jeffrey, on the Today show the next morning."

On Thursday, Woodruff will trade her normal news desk for the debate stage. As a debate moderator, Woodruff will be engaged in the news that she knows best. She'll also serve as an advocate for voters across the country, asking the questions that people need answered before they head to the primary polls.