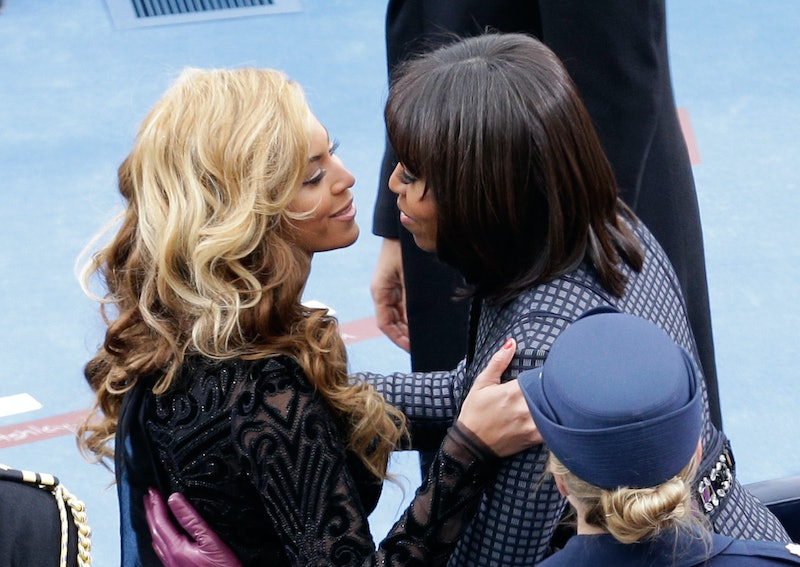 In the pre-Super Bowl interview, Michelle Obama joked about her conversations with Beyonce, which was entertaining in itself. Each year, President Obama does an interview just a few hours before the Super Bowl, and in his final year in office, FLOTUS Michelle Obama joined in the pre-football fun. When asked if she was excited about Super Bowl 50's halftime show, featuring Coldplay, Bruno Mars, and Beyonce, the first lady responded, "I care deeply about the halftime show. Deeply." She had some funny bits to add about her conversations with the Queen Bey, with whom she is famously acquainted.

Have you talked to her about any dance moves? Because those of us who've seen you dance on Ellen and Jimmy know that you got moves.

The FLOTUS gave an amusing — and, in Michelle fashion, sarcastic — response, stating:

Yeah, yeah, no, I've talked to Beyonce about that "turn up for what," I'm like, "Look, Bey, you gotta put this in your next video." Obviously, she didn't listen... No, Gayle, I didn't talk to Beyonce about dance moves.

Naturally, laughter ensued, and even President Obama looked convinced for a second of her statement's truth. Even he wasn't sure what Michelle would say next.

Afterword, King showed the first couple a romantic photograph of the two of them from 2008, to which Michelle responded, "You look so young. What happened to you? Nah, I'm just kidding!" They're a sweet pair, and as they've revealed over the past eight years, just like the rest of Americans. It's fun to see what people in the spotlight do on the days everyone is celebrating or gathering, which is one reason this yearly interview with the president is so diverting.

Although America may not see any dance collaborations between Beyonce and Michelle Obama, it's pretty clear that the first family has plenty of barbecue, champagne, wings, and guac — short for guacamole, as the president said it during the interview — to make their day an enjoyable one. Here's to a fantastic and exciting Super Bowl, and to a phenomenal halftime show!