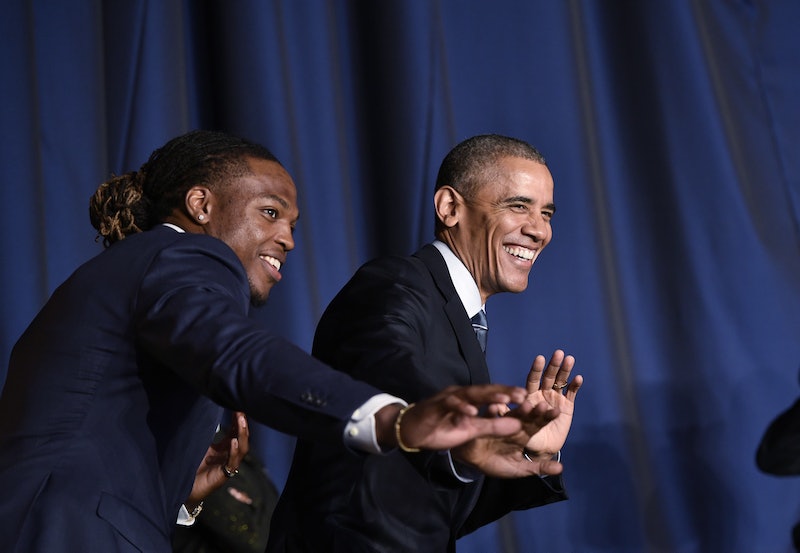 During his annual pre-Super Bowl interview, President Obama revealed his love for guacamole, even opting for the super millennial abbreviation "guac." The president counted the appetizer among his favorite Super Bowl snacks, as well as wings, pizza, and nachos.

The Obamas also spilled on their Super Bowl cheat day, when Michelle lets her "Let's Move" healthy living program fall a bit to the wayside. Apparently, there are no carrot quesadillas and the vegetable tray is present, but rarely gets touched. Since President Obama's Chicago Bears aren't playing this year, he almost seems more interested in the food than the game itself.

The set-up for the annual White House Super Bowl Party is spread out among three rooms, according to the Obamas. The Treaty Room, President Obama's private office in the Residence, is where the hardcore fans congregate to scream at the TV. Next is the food room, where the kids hang out (also where you would find me). Finally, the champagne room, where Michelle Obama's mother spends her time, completes the party space.

But champagne probably isn't the only alcoholic beverage consumed at the Obama's Super Bowl Party. During Obama's 2015 interview, he took Savannah Guthrie into the White House kitchen to show off the impressive line of home-brewed beers made at the White House. Back in 2012, Obama spoke passionately about his beer-brewing hobby on The Last Show. So although the subject didn't come up this year with Gayle King, it's likely that the president will enjoy some of his garden fresh beer with his chips and guac during tonight's game.

The president rounded out the interview with a secret game prediction that will be closely guarded until Monday morning, when it will be revealed on The Today Show. He is careful not to specifically root for one team or the other, in order not to make fans upset, but the president can still be supportive of the winner. If the Broncos win, Obama should celebrate with a Denver omelet, and if the Panthers win, a barbecue celebration seems in order.

The Obama's final pre-Super Bowl interview was adorable, thanks to the POTUS/FLOTUS couple game, and also hilariously relatable too. Even the First Family pigs out on the day of the big game and screams at the television when someone makes an amazing play. So if you indulge a little too much during the game, just remember that the Obamas have an entire room dedicated to champagne at their Super Bowl party.

More like this
Lashana Lynch’s 'Woman King' Training Was “Traumatizing” For A Relatable Reason
By Radhika Menon
Romance Authors Are Mobilizing For Reproductive Rights
By Natalia Perez-Gonzalez
New Coins Unveiled As King Charles III's Reign Gets Underway
By Sam Ramsden
Constance Wu On Self-Doubt, Family Drama, & Her Sister's Unwavering Support
By Constance Wu
Get Even More From Bustle — Sign Up For The Newsletter