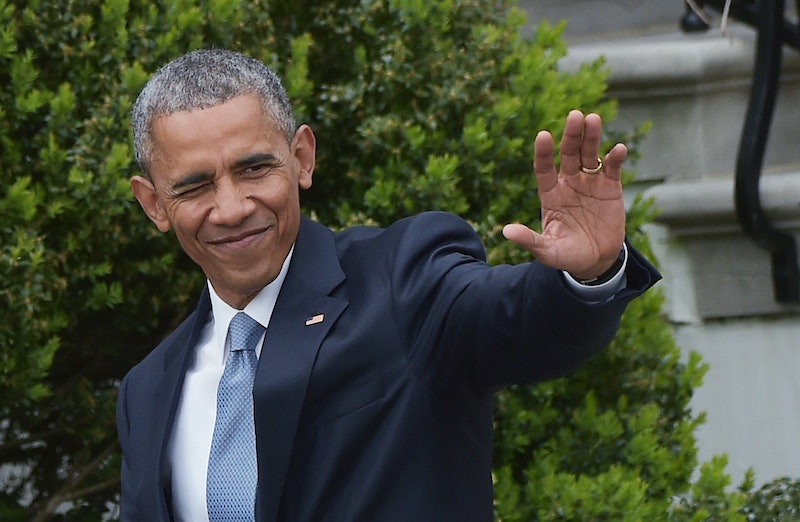 During his pre-game interview with Gayle King, President Obama picked a team to win the Super Bowl, but it won't be revealed until tomorrow morning. After a series of questions in which we learned how the First Couple celebrates the big game, and the important fact that Obama loves guac just as much as any millennial, King asked Obama to pick a Super Bowl winner by circling a team on an very official looking piece of paper. Obama asked if he could refuse, but he ultimately did pick a team — was it the Carolina Panthers or the Denver Broncos?

Obama has refused to predict a Super Bowl winner for the past seven years, after he successfully guessed that the Steelers would win the big game in 2009. So when King asked him to do so, he was hesitant, but she swore it wouldn't be revealed today. But a bit of camera work on the part of CBS showed the piece of paper Obama had written on, and it appeared that Obama most likely chose the Carolina Panthers to take it all. You can see, below the Panthers logo, that there seems to be a circle around the name.

Super Bowl 50 is expected to be a pretty close game. Panthers quarterback Cam Newton was just named the league's MVP of the season, but the Broncos have not only an incredible defense, but also a five-time league MVP in quarterback Peyton Manning. All things considered, it's likely to be a nail biter.

It makes sense why Obama has refused to predict the winner of the Super Bowl year after year. It can't be easy being the most powerful person in the country and have people probably actually considering your prediction when making their own. So far, though, he's batting 100 with the pick he made during the first year of his presidency — and we'll see how the last Super Bowl prediction he'll ever make as POTUS turns out.