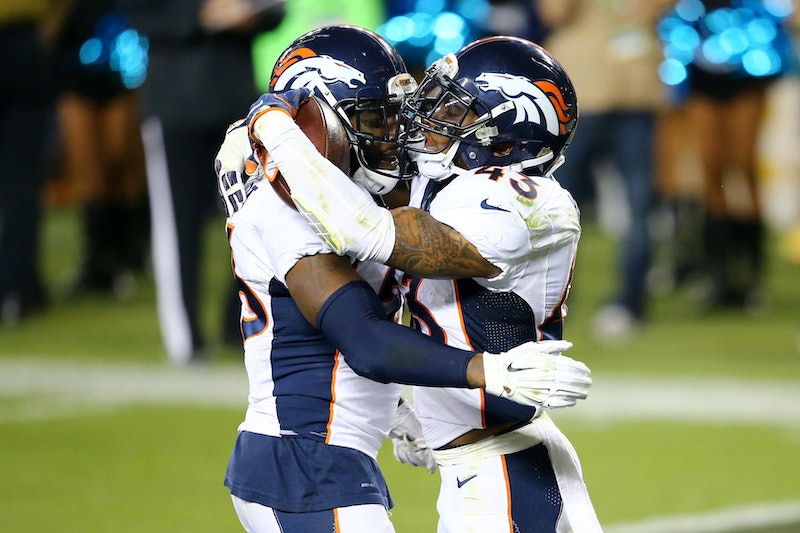 A major milestone was made on Sunday. The NFL celebrated five whole decades of the big game as the Denver Broncos and Carolina Panthers faced off in Super Bowl 50. Broncos quarterback Peyton Manning made history as the oldest QB to start in a Super Bowl at 39 years old. His opponent was the 26-year-old spark plug of a quarterback Cam Newton, whose ascent from college ball to the NFL has the dynamic player completely coming into his own. Newton's avant garde style backed by an impressive line put the Broncos' top notch defense to the test and they not only prevailed but dominated. The winner of the Super Bowl is the Denver Broncos with a final score of 24-10.

Sunday night's game at Levi's Stadium in Santa Clara marked a return of sorts for Denver, who disastrously fell to the Seattle Seahawks just two years prior in a one-sided snooze fest that effectively leveled the Broncos the following season. The Super Bowl also marked an ending of an era for Manning. Fielding rumors of retirement going into the game, the outcome will certainly affect the quarterback's decision as he either prepares to enter his 18th season in the NFL victoriously or call it quits after an illustrious career. Newton's performance was similarly inspired, marking a stark contrast between the NFL stalwart and the emerging quarterback who quickly made a name for himself on the national stage.

With the spectacular win, Manning becomes the oldest quarterback to not only compete in the big game but win it with the Broncos. The Super Bowl victory puts Manning at 200 total career wins, making him the most winning quarterback in NFL history, ascending to third in career playoff wins of all time. He will be just one career win over fellow legendary quarterback Brett Favre, whom Manning has drawn many comparisons to given his age and workhorse style.

Simply not enough can be said about the dominating defense that paved the way for a Broncos victory. The best defense in the NFL proved their mettle, ending the first half with a vicious sack to Newton by way of DeMarcus Ware, only continuing to eat precious time as they whiled their way towards a victory. The fate of the Panthers was sealed following a final touchdown and subsequent two point conversion that put Carolina two touchdowns away from even tying the game. To be fair, Carolina did have their moments in the sun. A spectacular Philly Brown catch got tongues wagging and the momentum pushing in the Panthers' favor only for the team to be thwarted by a bizarre fumble.

The Broncos forced the hand of the Panthers a dizzying amount of times, effectively halting their offense and rattling kicker Graham Gano, who connected the football with the right upright rather than through both posts. Ware and Von Miller proved to be the dynamic duo Newton and co. was afraid of as the defensive superstars hammered the quarterback and allowed for few opportunities for Carolina's stellar rushing game to shine through. Through it all, Manning led the offensive charge.

It would not be unprecedented for the Broncos quarterback to retire following his victory. Legendary Broncos quarterback John Elway was just one year younger than Manning when he played his last Super Bowl, netting a victory in 1998 against the Falcons, earning the game's MVP award, and retiring on a high note. It's unclear what the future holds for Manning and co. but the Broncos are most certainly looking forward to returning to Denver for their victory parade.