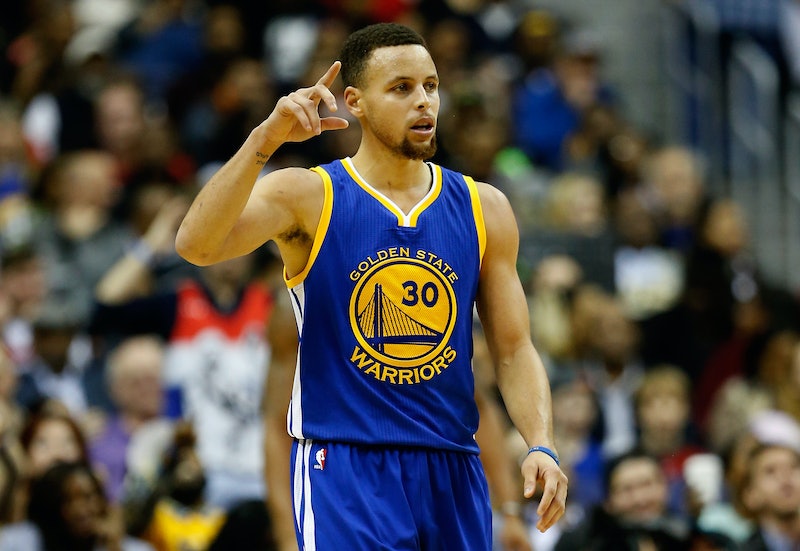 Super Bowl 50 kicked off to an energetic start as the Denver Broncos and the Carolina Panthers were announced to what appeared to be a capacity crowd at Levi's Stadium in Santa Clara, California. Bay Area fans were treated to an extra special introduction for Carolina by way of a beloved Golden State Warrior. Many were wondering why Steph Curry was the Panthers' drummer as the team took to the field. The stellar point guard has some seriously strong roots in Carolina.

Born in Akron, Curry grew up in Charlotte, North Carolina, where the Panthers are based out of. The famous fan's love of basketball was nurtured at a young age by way of his father Dell, who is a legend in Charlotte Hornets history. Curry was proud to don a custom jersey featuring his number, 30, as well as his last name. His appearance certainly wasn't unexpected, as the Panthers had teased his involvement earlier on Sunday afternoon. Banging on the "Keep Pounding" drum is considered quite the honor and you can tell by the enthusiasm Curry exudes that he is clearly over the moon about helping out his favorite NFL team.

The "Keep Pounding" tradition dates back to an iconic speech delivered by former Carolina linebacker and defensive coaching assistant Seth Mills, whose words furthered the momentum of the team's dynamic run up to Super Bowl XXXVIII. Mills would sadly succumb to intestinal cancer in 2005. His words have continued to serve as motivation. During every home game, the "Keep Pounding" drum is thumped. Curry joins an impressive roster of fans including the oldest woman to run a marathon and Medal of Honor recipient Cpl. Kyle Carpenter.

Curry is undoubtedly hoping for a favorable outcome for the Panthers that mirrors his performance against the Oklahoma City Thunder across the bay at Oracle Arena in Oakland the night before. His dynamic playing netted the Warriors 26 points on his baskets alone, not including his copious assists. Taking his day off to support his favorite team has surely been a treat for the NBA player. His wife, Ayesha Curry, has also been swept up in the Super Bowl festivities. Her porchetta biscuit sandwich at high profile chef Michael Mina's exclusive tailgate party reps Carolina in the most delicious way possible. With such passion for the Panthers and a lifetime of fandom, it's no wonder Curry jumped at the task to bang the iconic "Keep Pounding" drum on the field of the biggest NFL game of the season.