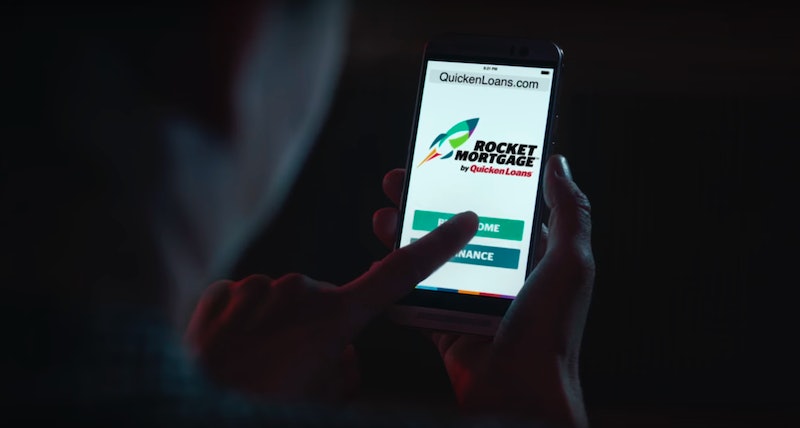 It's been just eight years since the massive financial crisis that brought the nation to its knees. The proliferation of shaky mortgages conspired to create a precarious housing bubble that subsequently burst and sent the United States spiraling into a recession. Quicken Loans' shocking #RocketMortgage Super Bowl commercial appears to harken back to that disastrous financial period. Needless to say, people are not happy about it.

Financial experts have called out Quicken for the ad, including the Consumer Financial Protection Bureau, which cautioned against making hasty decisions about something as life changing as purchasing a home. The company has responded by instead touting the conversation starting qualities of the app as well as its potential ability to further advance the economy. In a statement to Crain's Detroit Business, Quicken Loans had this to say about their minute long Super Bowl spot:

If this new mortgage experience from Quicken Loans can turn an intimidating process into something less daunting, more people will buy houses. If more people buy houses, they will need kitchen gadgets, appliances and furniture for their house. We will then need more people to make those amenities. With more craftsmen employed, they will also buy houses... and so on. It all starts with a website that simplifies home financing.

The commercial asks viewers if they would be more inclined to buy a house if the process were not only streamlined but made available via mobile tools. As with their previous statement, Quicken Loans envisions more homes being bought up and thus more purchases in general being made for amenities. The company appears to bank on artisanal goods, boasting that they can help craftsmen invest in property thanks to the supposed influx of business. Their efforts paint a rosy picture on a process that is typically understandably lengthy and has now become more regulated in the face of the 2008 crisis.

Undeterred, Quicken Loans also reportedly launched a sweepstakes tied to their #RocketMortgage program. The company will reportedly give away $100,000 in funds to alleviate mortgage costs for one lucky grand prize winner. Despite their efforts, the commercial has nonetheless been met with frustration and ire. It certainly doesn't help that The Big Short, a movie based off the Michael Lewis book that chronicles the aforementioned financial crisis and one firm's attempts to bet on the inevitable market collapse caused by the housing bubble bursting, put a spotlight on the terrible methods behind the situation. Quicken Loans made a risky bet on their #RocketMortgage commercial, and it does not appear to be paying off.

More like this
The 5 Best Laptop Power Banks
By Vanessa Spilios
You Can Stay At The 'Hocus Pocus' House On Airbnb
By Alexis Morillo
The 8 Most Comfortable Boots For Walking All Day
By Wesley Salazar
Craving The Beach? Here's Your Guide To A Solo Vacation In Turks & Caicos
By Alexis Morillo
Get Even More From Bustle — Sign Up For The Newsletter