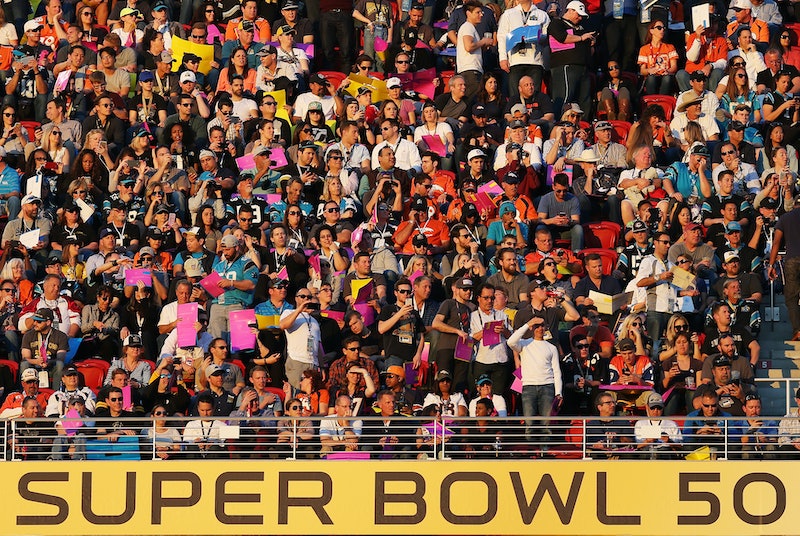 During the break after the halftime show, there was a powerful Super Bowl commercial about domestic violence. The ad depicts what's supposed to be a real-time text message conversation between "Jess" and another unnamed NFL fan. As the commercial progresses, it gradually becomes clear that Jess is being abused by her partner.

In the ad, Jess's friend sends a selfie and asks if Jess is coming to the Super Bowl party. Jess replies that they "don't think it's a good idea," prompting the friend asks if there's "something going on." Jess explains that "Jake is in one of his moods," and when Jess' friend asks if she's OK, Jess's text box lights up with a "..." animation, only to disappear. The animation reappears and vanishes several times; the implication is that Jess keeps beginning to type out responses to the "Are you OK?" question, but then erases them before clicking "send."

"There are many signs of domestic violence and sexual assault," warns the on-screen text. "Learn how to help. Text 'No More' to 94543." The spot was made by No More, an organization that's produced anti-domestic violence ads for the Super Bowl in the past.

Now, the very fact that an anti-domestic violence commercial aired during the Super Bowl is a good and commendable thing, given the utter importance of the issue itself. That said, the ad falls short of what it could have been, for a number of reasons.

First of all, while the concept is novel, the fact that the commercial takes place entirely over text message means that we never actually see the victim of the abuse in question. She remains off camera. This is problematic, because the fact that domestic violence and sexual assault are often invisible to outsiders is one of the problems the ad is purporting to address. If the goal is to bring domestic abuse out of the shadows, why not depict its victims as actual humans, rather than just text on a screen?

Furthermore, the commercial sidesteps the unfortunate fact that many NFL players have themselves been accused of domestic violence. That's not the commercial's fault, of course, but it's notable that the ad doesn't feature any actual players denouncing abuse. That would probably have been a much more forceful way to communicate the commercial's message to actual NFL fans.

Again, the mere presence of this commercial during the Super Bowl is a positive. Still, it could have tackled the issue more directly than it did, and let's hope that future Super Bowl ads against domestic violence and sexual assault do just that.