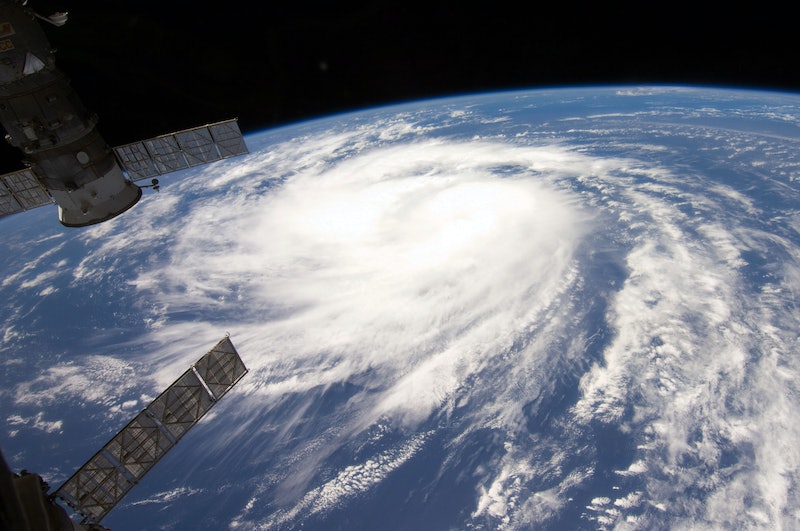 An astronaut shared a picture of his Game Day viewing party on Twitter, answering the question that wasn't on anyone's mind during the first half (but, in retrospect, absolutely should have been): Can you watch the Super Bowl in space? Scott Kelly had a bird's eye view of Super Bowl 50 as the Denver Broncos took on the Carolina Panthers at Levi's Stadium in Santa Clara, California on Sunday. And while his seat may not have provided the greatest view of the action happening on the field, his Super Bowl party at the International Space Station is hands down the coolest Game Day party I've ever heard of.

As host of what is presumably the hardest viewing party to get into on Super Bowl Sunday, Kelly found himself a tad lonely some 220 miles above Earth's surface. You might have better luck attempting to crash President Barack Obama's Super Bowl party at the White House than getting into Kelly's star-studded affair in space. Complicating Kelly's ability to watch the Super Bowl live (aside from the porthole view) is the fact the International Space Stations travels full circle around Earth in just 90 minutes, meaning the Bay Area could be in and out of sight before a point is even scored down on the field.

Kelly, who is currently serving a year-long mission at the International Space Station, said he was traveling at 17,500 miles per hour when he passed over California's Bay Area during the game.

Kelly is a part of the U.S.-Russian scientific research project known as The Year-Long Mission that has seen him and Mikhail Korniyenko of the Russian Federal Space Agency Roscosmos collect data regarding how long-term spaceflight affects humans' health. Kelly and Korniyenko launched on March 27, 2015, and are expected to return to Earth this spring after spending a total of 342 days in space, according to NASA. Essentially Kelly is serving as a sort of spaceflight guinea pig, allowing tests to be run on him as a means of collecting information about how space travel can affect one's medical health. The pair has currently been in space for 317 days, which is an achievement certainly worth celebrating with a Super Bowl party whether nachos are served or not.