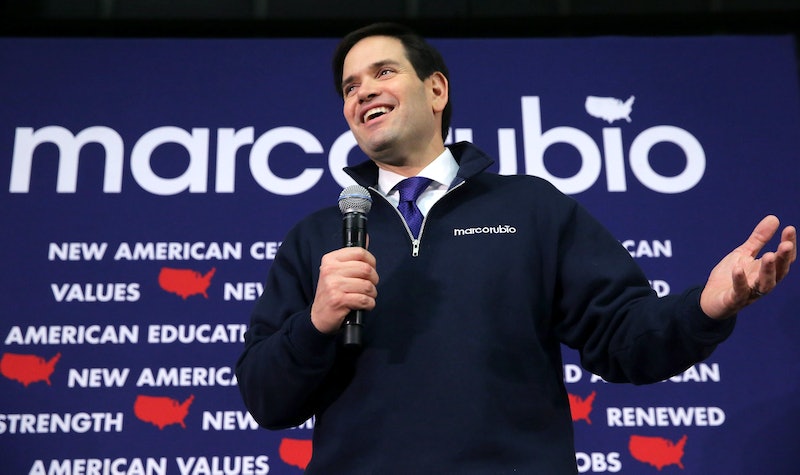 It's been a really tough weekend for Marco Rubio. First, the Republican presidential candidate gets his clock cleaned at the New Hampshire GOP debates Saturday night, and then he is caught ditching his own Super Bowl party before kickoff. According to Variety, Marco Rubio's campaign threw a Super Bowl party at Manchester's Ultimate Sports Center on Sunday. Rubio's campaign volunteers set up the typical football fare — popcorn, chips, and pizza — for the hundreds gathered at the rally, though they were apparently forbidden from the traditional Super Bowl gorging until the presidential hopeful finished his speech.

Not only did Rubio ditch his own Super Bowl party early, the senator failed to acknowledge his blustering mess of a performance at the previous night's debate. Instead of directly responding (and possibly recovering) from the way Gov. Chris Christie turned him into his personal punching bad, Rubio focused on stirring up dreary memories of life in the United States under Democratic President Jimmy Carter. “Remember the 1970s (under President Carter) — long gas lines and disco music. Those were terrible things,” he said. Yup, bringing up Carter and making cheesy jokes about disco sounds like the recipe for an awesome Super Bowl celebration.

Adding insult to injury, reports indicate the Rubio Super Bowl party wasn't exactly poppin'— even before Rubio made his departure. "After Rubio’s exit, the pizza and cake slices began to disappear as the crowd dispersed," Cynthia Littleton at Variety reported. In other words, shortly after the food vanished, so did the guests.

Whether Rubio's Super Bowl party bust will hinder his odds in the Granite state — or if his debate performance did that for him — will be determined on Tuesday.