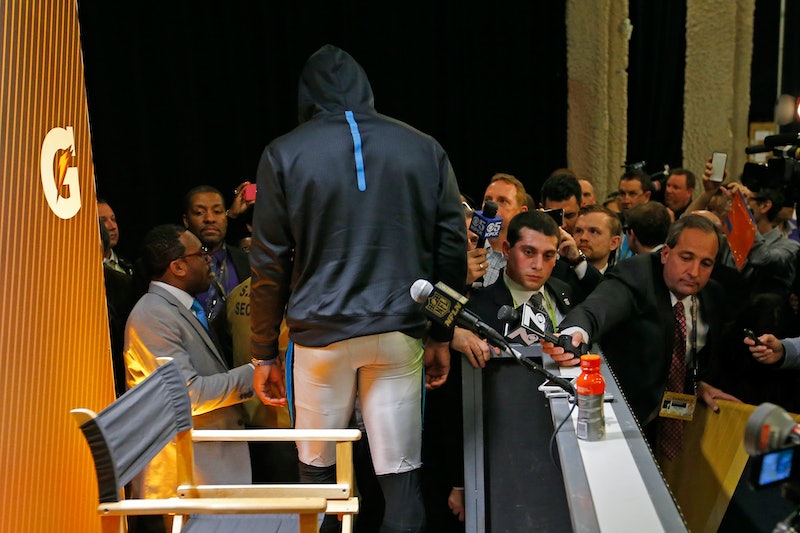 The Carolina Panthers had a rough night Sunday, and after Super Bowl 50, quarterback Cam Newton stormed out of a press conference after answering almost no questions at all. Well, maybe "stormed out" is a bit of an overstatement, as Newton was pretty calm when he stood up and walked away from the press. Still, he was visibly unhappy, and that's understandable — losing the Super Bowl must be an unpleasant experience, and for the athletes who've lost, post-game press conferences are an utter waste of time.

The post-game presser lasted about two and a half minutes, and Newton spent most of it looking miserable and staying silent. He ignored several of the questions posed at him, and the answers he did give were curt and to the point. "They just played better than us," he said at one point. "I don't know what you want me to say." Eventually, he just got up and left.

Some people disparaged Newton's conduct, suggesting that he was somehow unsportsmanlike or ungracious. One of the haters was actor Rob Lowe, who sarcastically commended Newton for being "classy" and setting "an example for the kids." But that's nonsense. At the end of the day, participating in a post-game press conference after losing a big game is nothing more than an exercise in masochism, and Newton's irritation with the ritual is completely justified.

The problem with these events is that the athletes in question are rarely asked any questions of substance. More often than not, the press's inquiries boil down to some variant of, "So, you're probably unhappy that you lost, huh?" That was indeed the case on Sunday — the last words spoken by a reporter before Newton walked off the stage was, "It's gotta be pretty tough for everybody in the locker room."

You'll notice that this isn't even a question. It's essentially a request that Newton bask in his own defeat, and there's nothing to be gained from that. While there isn't anything wrong with asking an athlete to analyze their performance at a game, expecting them to sit through a substance-less grilling about their sub-par performance doesn't serve anybody. Newton was right to eschew that tradition, because at the end of the day, it's a pointless one.

Check out the full interview below.