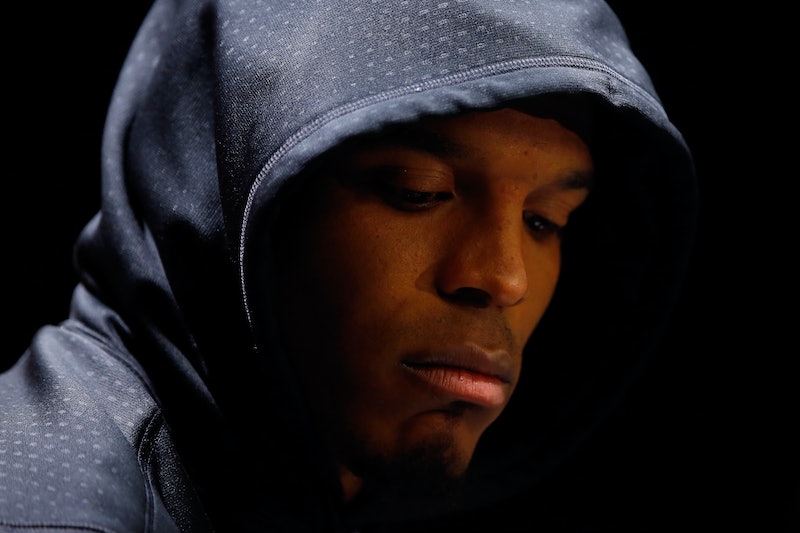 Super Bowl 50 has been one for the record books, with Peyton Manning breaking two league records, and Eli Manning's reaction face to his older brother's triumphant win breaking the Internet. But this is the one Cam Newton Super Bowl 50 meme that will tug at your heartstrings, especially after the quarterback's brusque short press conference after the game.

In the meme, Simba from The Lion King comforts Newton as he writhes in obvious distress and heartbreak after a ref call gave the Denver Broncos another shot at scoring a game-clinching touchdown. (The Panthers would go on to lose to the Broncos 24-10.) The meme taps into all of your childhood trauma over Mufasa's death and will definitely go down as one of the most hilariously depressing images to come out of this year's Super Bowl.

Hopefully, Newton will be able to get past this loss before the start of the 2016-2017 NFL season. With Manning's retirement from the league more likely than not — or at least, it was until the 39-year-old nabbed his second Super Bowl ring — there could easily be a situation where the Carolina Panthers are able to build on their momentum from this season and go on to win Super Bowl 51 next year. Who knows — stranger things have happened.

Newton was clearly distraught over his team's loss to Manning's Broncos, and it is a poignant reminder of how absolutely invested athletes are in the outcome of the contests, more so than even the most dedicated fan could ever be.