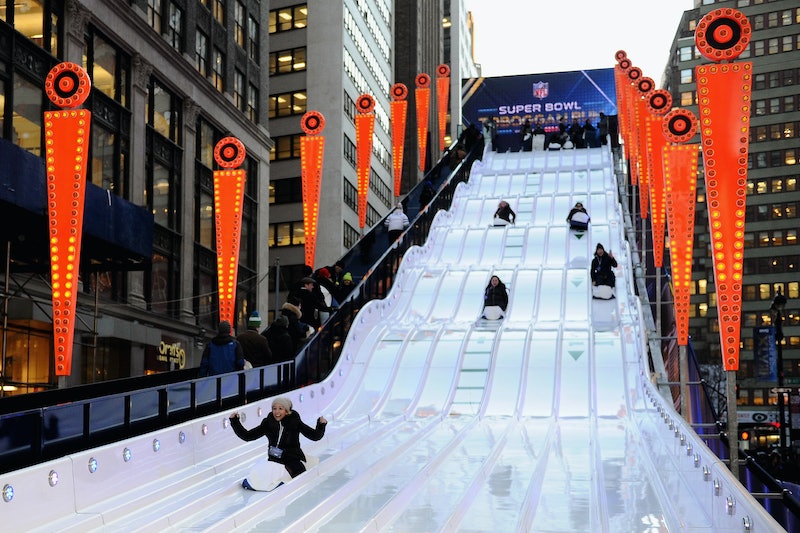 Super Bowl Boulevard opened in New York City’s famed (mobbed, overcrowded, super touristy) Times Square on Wednesday and as an avid football fan, I had to be there to witness it. I did it up big, taking a bus ride down Broadway in the freezing cold — willingly. You do stupid things for love, kids. I never thought I’d live to see the Super Bowl played in the dead of winter in my (freezing, snowy) home state of New Jersey. I also never thought I'd have to head to the most densely populated location in the world, which isn't even in the same state as the game, to revel in that glory. But this is the Big Apple and NYC does what it wants. So what exactly is Super Bowl Boulevard? It's like a giant carnival on crack. And it includes these crazy things...

A Snowflake Toss and other ridiculously “themed” games

So if Jersey Shore's Seaside boardwalk got a facelift and then relocated to Times Square, this is exactly what it'd look like. Except 99.9% of this stuff is marketed for the cold weather game. Let’s keep throwing it in peoples’ faces that they are most likely going to suffer frostbite as a result of attending the Super Bowl. The tagline for the game is even “Don’t get left inside.” LITERALLY. It’s February guys, and you're acting insane.

Lots and lots of football fans

Packers jerseys and Steelers jerseys mainly dotted the well-lit Boulevard. Oh yay, all the football fans! Too bad none of these people were fans of the teams actually playing in the Super Bowl. Denver and Seattle fans, I’ll give you the benefit of the doubt and blame this on weather, but literally you have like two more days to get here.

Did I mention that I rode a bus with “The Bus” himself. Who? What? I hung out with Jerome Bettis, the Steelers’ running back in the ‘00s (holy crap, remember those days?) with Courtyard Hotel, the official hotel of the NFL. When I say hung out I mean other people asked him a lot of football questions and I shivered and looked up in awe. At one point he decided to shout “Go Steelers” to a pack of people wearing Steelers’ gear. You guessed it, they had absolutely no idea who he was. So I guess we can add fake football fans to this list of crazy shit going down.

Yummm free pizza. Ewww, it was Papa John’s pizza. You mean to tell me that the city that boasts the best pizza in the world could only get Papa John’s on board? Ugh. Also, Petyon Manning totally works for them. Would you like some bias with that slice?

I mean one guy even gave me a map. Let me know the next time you’re lost in Times Square and someone points you in the right direction. Way to bring on the charm this week, NYC. I’m actually impressed.

Psych, these weren’t crazy, they were amazing. Awww, Godiva dresses their chocolates up to look like footballs.

The Toboggan Run (which is just a giant slide)

I wanted to hate this thing so badly, but then I remembered I grew up in amusement parks and all I wanted to do was ride the damn thing. But in true form, the line was stupid long. Also, can we go back to calling this what it really is? It’s a giant slide. Thank you very much.

So despite the freezing temperatures, all this craziness, and the fact that the NFL definitely made the wrong call allowing this game to be in Jersey, you should definitely head on down to the Boulevard if you can. After all, the Super Bowl is in New Jersey, and New York City has managed to take all the credit. Rest well everyone, everything is exactly as it should be.

More like this
Craving The Beach? Here's Your Guide To A Solo Vacation In Turks & Caicos
By Alexis Morillo
Twitter Is Saying The Same Thing About Roger Federer’s Retirement From Tennis
By El Hunt
Twitter Is Freaking Out Over Rihanna’s 2023 Super Bowl Halftime Show Announcement
By Stephanie Topacio Long
The 5 Best Laptop Power Banks
By Vanessa Spilios
Get Even More From Bustle — Sign Up For The Newsletter