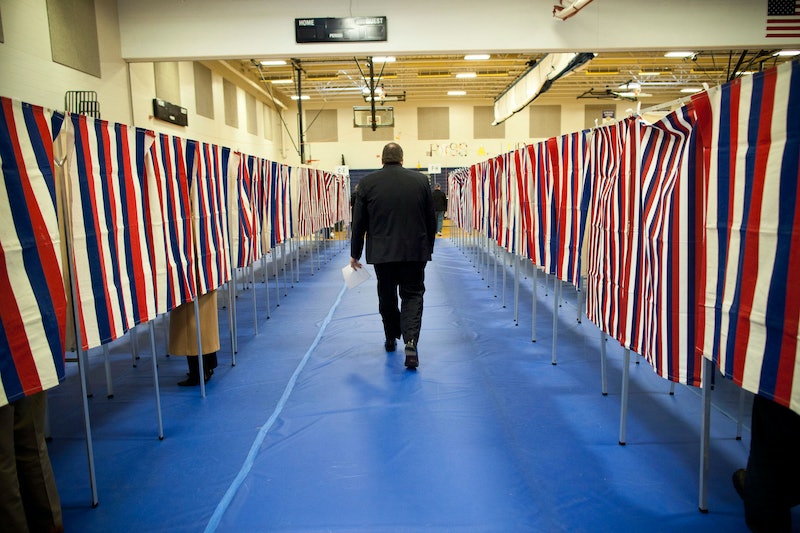 New Hampshire's population make up less than one-tenth of the entire United States, but, as the first primary state to cast a ballot, its votes stand tall in the scheme of American politics. If the first primary of the election season is anything like Iowa's caucuses, Tuesday's competition will be close and undoubtedly suspenseful. If you don't have access to a television during the New Hampshire primary results, there a few ways you can keep up with the live action.

If you're interested in viewing live coverage of the New Hampshire primaries, which will go well into the evening, your best bet will be streaming CNN on your laptop or with an app on your phone. Each town within the state schedules its own voting time and most ballots are open from 7 a.m. until 7 p.m. ET, making it easy to catch tidbits of coverage anytime throughout the day. The news broadcast channel will be airing commentary on the process as well as the results until about 2 a.m. on Wednesday morning. Other major news channels, such as MSNBC and Fox News, will also be broadcasting the results.

Sometimes, tuning into a news program can be tedious if you're in a hurry or just want plain and simple updates on the results. In this case, visit the site for Manchester, New Hampshire's local news station, WMUR9, and look for "NH Primary Vote Results." The site features an interactive primary results map, a voting results chart organized by county or congressional district depending on your preferences, and a national delegate tracker. From anywhere, you can take a glance at the state's aggregate results or explore the differences in votes among 300 different precincts — pretty nifty.

And lastly, if you're too eager to wait until the voting begins at midnight early on Tuesday morning, POLITICO provides readers with a countdown clock for the New Hampshire primary. The site also features another interactive map that provides a great visual reference for distinguishing between full results and partial results, allowing you to keep track of vote trends before all of the ballots are counted.

According to Real Clear Politics' polling averages collected thus far, Republican Ted Cruz, who won Iowa's caucuses is coming in fourth place at just under 12 percent support. Donald Trump, who came in second place in Iowa, is polling in at first place. As for the Democratic party, Bernie Sanders is heading Hillary Clinton by a full 13 points.

Since Martin O'Malley waited to drop out of the race until after the Iowa caucuses, New Hampshire's primary will mark the first time the two candidates run alone against each other. In Iowa, Clinton barely took the win. That being said, Sanders may have a bigger advantage in New Hampshire because it's close to Vermont, the state where he serves as senator. New Hampshire's ballot will also include less candidates after several suspended their campaigns following the release of Iowa's caucus results. They include Martin O'Malley, Mike Huckabee, Rand Paul, and Rick Santorum.