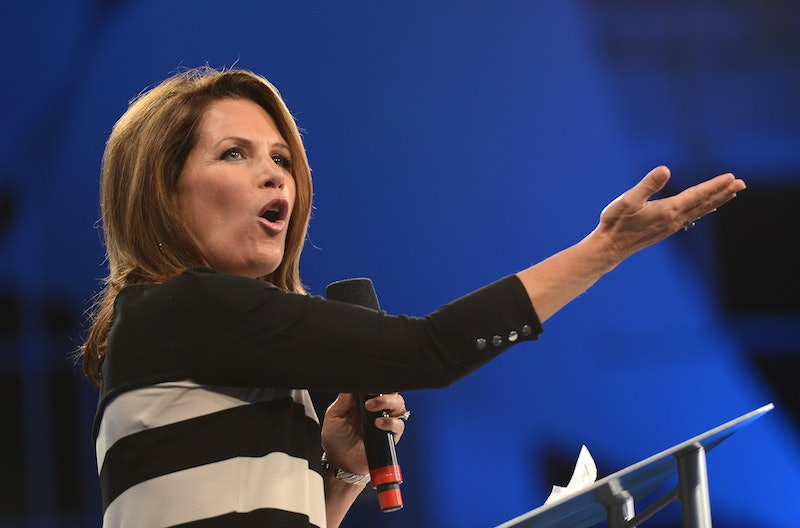 As the primary elections kick off and the U.S. presidential elections approach quickly on its heels, it's time for us to remember some controversial candidates of past years. Tea Party politician and Minnesota Rep. Michele Bachmann ran for the presidential Republican nomination in 2012, but quickly dropped out after the Iowa caucuses. As a figure who was either loved or hated by politically-savvy citizens, Bachmann garnered media attention for various reasons, aside from her penchant for ultra-conservative, and oftentimes false statements.

In 2012, for example, she faced criticism from her own party for promoting Islamophobia when she claimed that some American government agencies were being infiltrated by the Muslim Brotherhood. Gaffes, such as this one, ultimately contributed to the premature suspension of her 2012 campaign, which began as quite promising.

In the summer of 2011, the Congresswoman, who got her political start by protesting abortion clinics in the early 1990s, announced her bid for the presidency and her prospects seemed promising. In August 2011, Bachmann became the first woman in American history to win the Iowa Straw Poll, a GOP fundraising event. Though this particular straw poll hasn't been historically accurate in predicting Iowa's caucus winners, the victory was significant. However, after coming in at just under five percent support in Iowa's caucuses the following January, the high-profile candidate decided to suspend her campaign. Her congressional career recently came to an end at the beginning of last year on Jan. 3, 2015. She held the position for eight years.

With her overtly political career behind her, what is Bachmann up to now? Though she may not be a member of Congress anymore, she has continued to be rather outspoken when it comes to her much-debated political views. Not shockingly, she has shown support for Donald Trump. This past August, shortly after candidates began announcing their presidential bids, Bachmann was featured in an interview with CBS News. In it, she suggests that similar to Sarah Palin's focus on the threat posed by Russia during her 2008 bid for vice president, Donald Trump has a good "gut instinct" when it comes to predicting America's future in foreign policy. This time, she was referring to his disapproval of the United States' nuclear deal with Iran. She went on to interpret Trump's honesty about having supported Democrats in the past as a sign of humility.

Bachmann has also continued to speak on her religious views as a born-again Christian — views that are deeply ingrained in her political mindset, as well. During her tour of Israel last year, Bachmann spoke with Tony Perkins, the founder of conservative Christian group Family Research Council, on his radio show and fulfilled a missionary-esque role of spreading the religion in Israel.

We recognize the shortness of the hour and that’s why we as a remnant want to be faithful in these days and do what it is that the Holy Spirit is speaking to each one of us, to be faithful in the Kingdom and to help bring in as many as we can — even among the Jews — share Jesus Christ with everyone that we possibly can because, again, he’s coming soon.

The implicit invocation of Christianity as the only "faithful" religion came as troubling in a globalized world that believes in various forms of a higher power. More recently, Bachmann has also been keeping up with the presidential debates on social media. Her tweets were delivered quite candidly, lacking punctuation, proper grammar, and explicit reference to questions asked. She made broad generalizations about the candidates' comments, calling Jeb Bush a "Muslim defender," for example.

Currently, Bachmann takes care of her five children and helps her husband run their Christian counseling business called Bachmann & Associates. By providing commentary on the GOP race, she remains involved in the political media sphere.