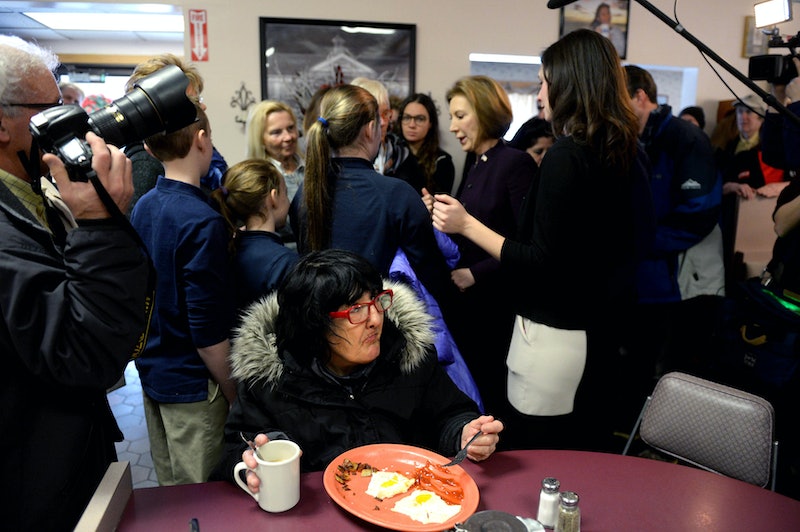 With just one day until the New Hampshire primary, Republican and Democratic presidential candidates' campaigns were all in full force throughout the state on Monday. Carly Fiorina spent the day in Manchester, trying to rally votes to keep her presidential bid alive after having to sit out the last GOP debate. A photo tweeted by The New Hampshire Union Leader showed the media surrounding her in what appeared to be a diner, while an unidentified woman paid no attention to the candidate and continued eating her breakfast. What made the situation even funnier was that the woman ignoring Fiorina looked exactly like Tina Belcher.

Along with possessing an uncanny resemblance to the Bob's Burgers character, the woman seems to act just like her. Some people would drop everything to see one of the women or men running for president, but she was much more interested in finishing her meal. I can't blame her — breakfast is the most important meal of the day, and only a major event could persuade me to abandon my eggs and coffee. One such event, though, would be seeing a presidential candidate whom I supported or even had a slight interest in. The oldest Belcher daughter, who shows almost no emotion except when boys are involved, would probably react the same way as the New Hampshire woman, responsibly choosing to finish the meal she paid for.

Tina's pretty socially awkward, so she would be the one person to sit on the sidelines of an event. She definitely wouldn't want to insert herself into a huge crowd of cameras, reporters, and fans just to get a glimpse of a woman chasing the White House. She perfectly channels Tina's main expression — apathy. She seems to be looking around a little confused, as if thinking, "I'm not sure what's going on, so I'm going to sit here and finish my coffee." Tina would never waste a good cup of coffee. In fact, in the season 3 episode "The Unnatural," the 13-year-old develops a coffee addiction after Bob installs an espresso machine in the diner.

Also in true Tina fashion, she wasn't afraid to go out to breakfast alone, or to confidently keep her seat as the media swarmed around her. She obviously didn't care about seeing Fiorina, and she didn't feel the need to join the crowd just to fit in. As a self-proclaimed "smart, strong, sensual woman," Tina would approve of her putting herself (and her food) first.

As a rational adult, I put a lot of thought into which candidate my favorite cartoon characters would endorse for president. Despite her young age, Tina is a strong feminist role model, and probably wouldn't be fond of Fiorina's attacks on Planned Parenthood and general anti-abortion agenda. I can only speculate about this lookalike's feelings toward Fiorina, but her lack of enthusiasm about the candidate's proximity to her and her breakfast suggests that she isn't a huge supporter.

It's only on very special occasions that two of your favorite things serendipitously collide, and today, politics and Bob's Burgers did just that. Thank you, universe.