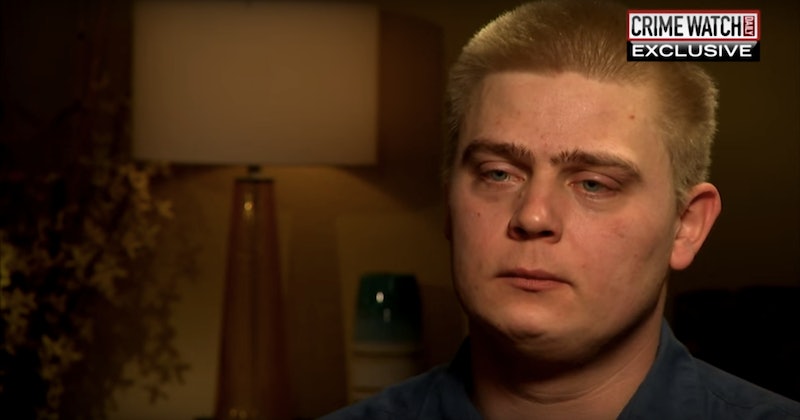 On Monday, Crime Watch Daily aired an interview with two of Steven Avery's children, twin sons Bill and Steven Jr. It was their first-ever television interview about their father, the man whose life is the focus of the Netflix docuseries Making a Murderer. Why the twin brothers had not agreed to any earlier interviews remains largely unknown, but Steven Jr. says they agreed to this particular interview because the interviewer, Melissa Moore, shares a story with which the Avery sons might have been able to connect.

Moore found out her own father was a serial killer (called the "Happy Face Killer"), which Moore did not learn until she reached her teenage years, she wrote for BBC News. The truck driver reportedly murdered eight women in the 1990s, according to ABC News, before he turned himself in and was sentenced to three consecutive life sentences in Oregon. Like the Avery twins, Moore says she did not have a close relationship with her father, and didn't learn of her father's crimes until her mother told her he was arrested for murder in mid-1995. In her BBC News article, she wrote:

Somehow I ended up feeling that I had to pay restitution for his crimes. I felt dirty, I felt less of a person, I felt isolated, I felt alone. I used to think that I couldn't live in this world and be a part of it. I would always be a spectator, watching normal people go about their lives.

In the Crime Watch Daily segment, Moore focused the interview on the Avery twins' feelings and perceptions about their father's case. Their respective sentiments seem similar, though there is a nuanced difference between their perspectives on their father. Steven Jr. said he is not certain as to whether his father committed the murder of 25-year-old photographer Teresa Halbach, but while Bill believes his father is innocent, he claimed Avery had anger issues that led him to believe it's possible Avery could have killed Halbach. But the only person who could truly unravel the mystery of their father's guilt or innocence is Halbach herself, Steven. Jr. explained during the interview.

I have no idea. … Only one person could answer that, and that's Teresa Halbach. But she can't answer it no more.

Although both brothers aren't categorically certain of their father's innocence, both agree that the trial that sent Steven Sr. and his nephew Brendan Dassey to prison for life was "very shady." It is clear the twins are not particularly close with their father — Bill sees him "as a complete stranger" — but even so, the two have strong views on whether or not their father and cousin should remain behind bars. Steven Jr. explained:

I think him and Brendan deserve a fair trial. ... If they're guilty, let them sit. But if they're free, get them out. It's been 10 years now.

Apparently, both brothers were denied jobs upon returning to civilian life after time in the military because of their last name, they told Moore. This social predicament and a desire to reveal the indirect effects of their father's circumstances may have led them to come out and speak today. Whether it was an integration of right interviewer and right time, or simply a powerful need to reveal a pent-up truth, the Avery twins remarked that they would not change their lives for another hand, even if they could. At the very least, they could rest assured that Moore was not casting judgment their way.