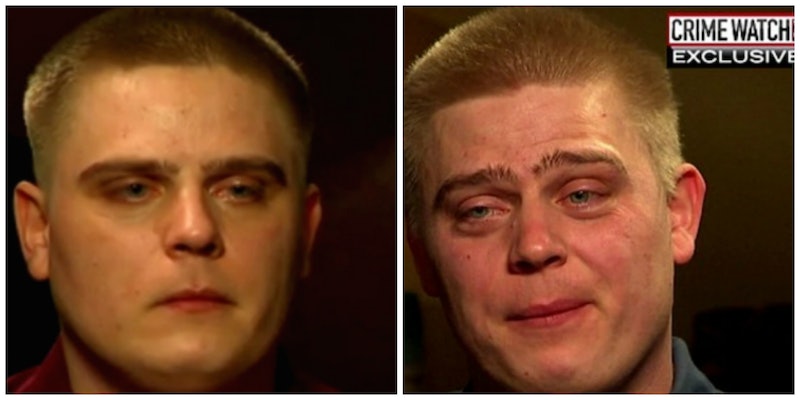 Bill and Steven Avery Jr. broke their silence about what it's like to live in the shadow of Making A Murderer Monday in their first ever television interview since the Netflix docuseries became a cultural phenomenon. Steven Avery's sons watched some of Making A Murderer for the first time while speaking to Crime Watch Daily about how their father's legal battle and America's obsession with it has impacted their lives.

In an exclusive interview with Crime Watch Daily's special correspondent Melissa Moore, Bill and Steven Jr. watch a clip from the show that has changed their lives. In the clip, Making A Murderer filmmakers briefly run through a series of angry letters Avery exchanged with his then-wife Lori Mathiesen while Avery was imprisoned for the rape of Penny Beerntsen, a crime he was later exonerated of thanks to DNA evidence. The letters, which are often sad and angry, reveal a marriage severely strained by Avery's time in prison. In one letter, Avery threatens to kill Mathiesen if she does not bring twins Bill and Steven Jr. and their two siblings to see him in prison. "Fuck you if you dont brang up my kids I will kill you I promis. Ha Ha [sic]," he wrote in the letter.

Avery's sons said they had mixed emotions after seeing their parents' correspondence. "I care a lot for my mom, so it kind of makes me look at him different," Bill told Moore, adding "I know he's got anger issues." Bill also said he didn't think his father killed Teresa Halbach because he wouldn't have wanted to jeopardize the money expected to be coming his way from a lawsuit related to his wrongful conviction.

Bill's twin brother Steven Jr. remained skeptical of what the letters revealed about his childhood and his parents' relationship. "I don't know whether to believe that or not," Steven Jr. said in reference to a letter in which his mother threatened to hurt their children out of frustration of being a single mother of five. "It didn't look like my mom's handwriting." Steven Jr. said Avery's letters are evidence his father struggles to show love. "He says he loves her, that he always loved her, he loves us. I know that he does, but he's also showing it in the wrong ways."

Steven Avery's estranged twins told Moore it's been over 20 years since either of them have spoken to their father, but they might be open to establishing some kind of relationship with him. Bill admitted he's struggled his entire life with knowing his father, given the extensive amount of time Avery has spent behind bars. "I just see him as a complete stranger," Bill said. "But I would still like to better understand that side of me." Steven Jr., named in tribute to his father, said he doesn't think of the man America can't stop talking about as Dad. "He deserves to get to know me ... even though I don't look at him as a father," Steven Jr. said. "I'm a 30-year-old man ... it's kind of late to get a [father-son] bond like that... but I'm willing to give it a shot."

For most of us, Making A Murderer is an easy-to-fall-into rabbit hole that might have us spending hours perusing information online or arguing with friends and family (not to mention relative strangers on the Internet) about evidence, but, for Avery's estranged twins, it's real life. While viewers debate Avery's role in Halbach's murderer relentlessly, Bill and Steven Jr. are simply trying to move on with the lives they built for themselves without their father.

More like this
Where Is Armie Hammer’s Ex-Wife Elizabeth Chambers Now After 'House Of Hammer'?
By Grace Wehniainen and Radhika Menon
Alec & Hilaria Baldwin Gave Their 7th Child Another Version Of The Name Hillary
By Stephanie Topacio Long
Jeffrey Dahmer’s Arresting Officer John Balcerzak Got His Job Back After Being Fired
By Grace Wehniainen
Gabby Petito’s Family Responded To The New Lifetime Movie About Her Final Days
By Grace Wehniainen
Get Even More From Bustle — Sign Up For The Newsletter