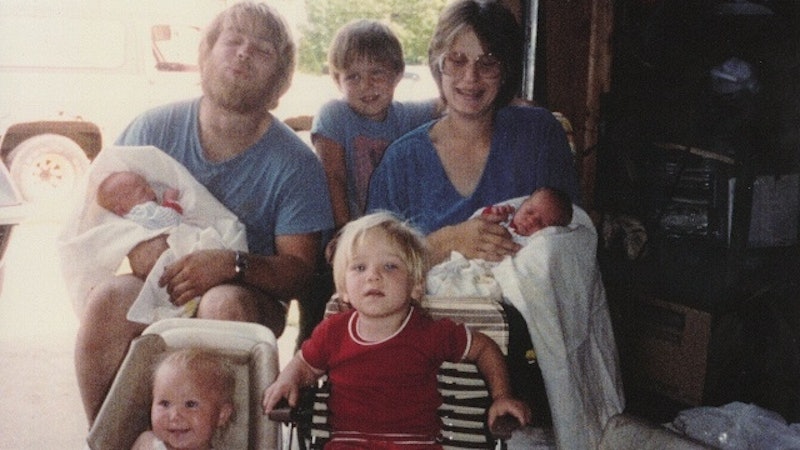 In an exclusive interview with Crime Watch Daily, two of Making A Murderer star Steven Avery's children revealed their father has a reputation for struggling to control his anger. Twins Bill and Steven Jr. said Avery has anger issues. In their first television interview since the release of Netflix's true-crime docuseries, Avery's now-grown sons discussed everything from their parents' tumultuous marriage to what it's like to have such an infamous last name. But the most interesting revelation about Avery's past in Crime Watch Daily's exclusive interview came from Bill, who claimed his father has long struggled with anger management.

Whether or not Avery has problems controlling his anger has been a highly-debated topic since Making A Murderer quickly became America's newest obsession. In fact, as I write this, users on Reddit are picking apart statements Avery's family members and exes made in the early 2000s about his temper. But will Bill's claim that, yes, his father has been known to have problems controlling his anger put an end to arguments on the topic once and for all? Bill told Crime Watch Daily's Melissa Moore in an interview that aired Monday:

I know he's got anger issues a lot. ... I guess he'll like blow up and go into full rage mode.

Afterward, Moore asked if this meant Bill, who said he thinks his father is innocent, thought it was possible that Avery could have killed Teresa Halbach, Bill said:

Bill's statement about his father's explosive temper isn't shocking. Avery's ex-girlfriend Jodi Stachowski has also spoken publicly about Avery's alleged anger problems. In January, Stachowski contradicted many of the things she told Making A Murderer filmmakers when they were shooting the series in an interview with HLN's Nancy Grace. Stachowski described Avery as a "monster" and claimed he had once threatened to kill her, her family, and a close friend of hers. She alleged Avery had also once threatened to electrocute her by dropping a blow dryer into her bath. A police interview conducted in February 2006 with Brendan Dassey's brother, Bryan, claims he described Avery to police as "always having a bad temper." None of these allegations have been officially responded to by Avery or his lawyers.

What is interesting, is that his father's alleged anger management issues aside, Bill seemed more sure of his father's innocence than his twin brother Steven Jr., who said only Teresa Halbach could tell us for certain if Avery was involved in her death. Bill said he believes his father to be innocent because he doesn't see why his father would want to ruin his chance to cash in big from the wrongful conviction lawsuit he had open at the time. Although Bill admitted it might be a possibility his father murdered Halbach in 2005, he added:

I don't think he did.

But how much does it really matter if Avery found himself unable to control his anger? Whether or not Avery was prone to shouting or shoving, he still has the right to a fair trial. The American criminal justice system was built around the presumption of innocence, the principle that every man or woman is innocent until proven guilty. A reputation for allegedly having a Hulk-like anger shouldn't excuse prosecutors from having to prove beyond a reasonable doubt that Avery committed the crime they said he did.

More like this
'Line Of Duty’s Jed Mercurio Has A New Crime Drama In The Works
By El Hunt
Where Is Armie Hammer’s Ex-Wife Elizabeth Chambers Now After 'House Of Hammer'?
By Grace Wehniainen and Radhika Menon
Jeffrey Dahmer’s Arresting Officer John Balcerzak Got His Job Back After Being Fired
By Grace Wehniainen
Gabby Petito’s Family Responded To The New Lifetime Movie About Her Final Days
By Grace Wehniainen
Get Even More From Bustle — Sign Up For The Newsletter