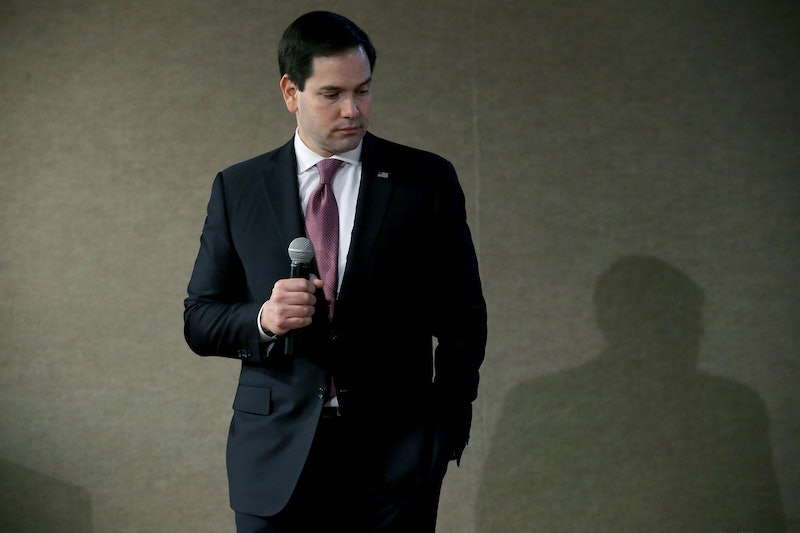 Sen. Marco Rubio's unexpected third place grab in the Iowa caucuses on Feb. 1 brought with it a bump in poll numbers and an increase in media attention. He narrowly lost the second-place spot to Donald Trump by 1.2 percent in what turned out to be a tight three-way race between Trump, Rubio, and Sen. Ted Cruz. As the senator rides the wave of Iowa, it's important to pay attention to how Rubio does in the New Hampshire primary. If he performs well, it could further propel his campaign; if he does poorly, it could be the beginning of his descent.

After finishing third in Iowa, Rubio saw a modest boost in New Hampshire polls. Still, Donald Trump is the front-runner in the Granite State by a large margin; based on averages of recent polls, Trump is at 31 percent, with Rubio in second place at 14.8 percent. His number two spot is itself precarious, as Cruz and Gov. John Kasich are each within 2 percent of him. But if Rubio does clinch second place in New Hampshire, this could be enough to garner him a decent amount of media exposure, and to make him appear viable to voters who will participate in primaries and caucuses to come.

But the senator has received an abundance of negative media attention since Saturday's debate, where his repetitive insistence that President Barack Obama "knows what he's doing" — which is, according to Rubio, "undertaking a systematic effort to change this country, to make America more like the rest of the world" — was poorly received. New Jersey Gov. Chris Christie ripped into Rubio particularly hard, poking fun at "the memorized 25-second speech that is exactly what [Rubio's] advisers gave him."

Politico reported that 68 percent of GOP insiders surveyed said Rubio lost the debate, and some insiders used such descriptions as "cringeworthy" and "robotic" to describe the senator's performance. However, the disdain bred by Rubio's debate debacle might be limited to party insiders, the media, and those not already on his side. Interviews conducted by CNN, along with a small post-debate poll, suggest that Rubio has not lost any support in New Hampshire.

It's almost certain that Trump will take New Hampshire on Tuesday, and there will likely be a three-way race for second place between Rubio, Kasich, and Cruz. Results from the primary may be available as early as Tuesday night, but we may have to wait until Wednesday for official results.