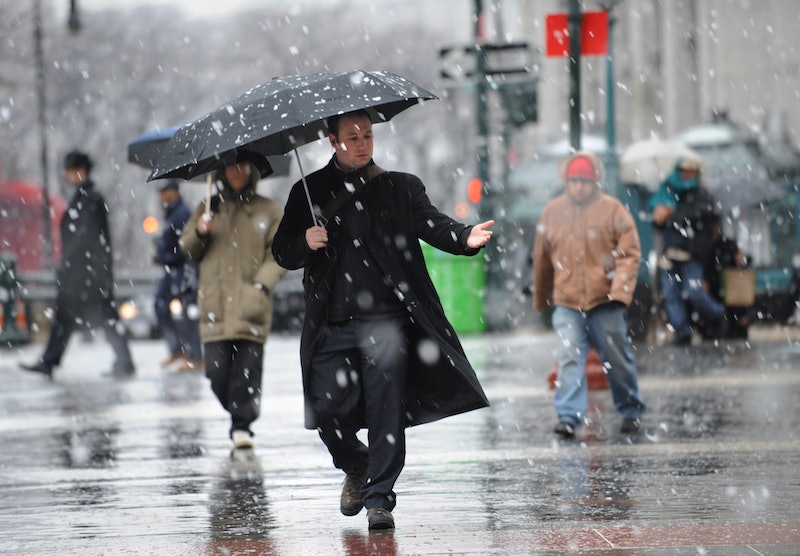 With Tuesday's upcoming New Hampshire primary, the presidential candidates might have an additional opponent they'll need to consider — the weather. The Granite State is known for its wintry mixes throughout the colder months, with February being the second chilliest during the entire year. Though Tuesday itself looks mostly clear, weather reports for New Hampshire both days leading up to and after the primary indicate light snow, which could affect voter turnout. But any amount of snowfall can be a large deterrent to wanting to leave the house, a misgiving residents of New Hampshire will need to overcome during the nation's first primary election.

Reports for Monday during the day to late evening show steady snowfall throughout the state. Though many in the Granite State are surely used to this type of weather, the snow itself may be a big enough obstacle to those who are less enthusiastic or undecided about voting. Temperatures for Tuesday will only hit 29 as a high, and will continue to fall as Wednesday is expected to bring in more snow.

With New Hampshire holding the first primary election in the nation, voters in the Granite State have a particular sway over how the rest of country (as well as all-important donors) see a candidate. This primary can help in building or dismantling a candidate's momentum after last week's contentious Iowa caucus. With this in mind, candidates are surely hoping that some snowflakes won't deter too many voters from hitting the polls.

This wouldn't be the first time an election has essentially been decided by the weather, however. It's a given that snow and rain have the potential to affect voter turnout. But after studying patterns of voter turnout, political scientists found that two very important election results had been flipped by the weather on election day. As Salon reports, John F. Kennedy snagged a victory due to a particularly dry election day. Presidential candidate Al Gore, however, reportedly lost the 2000 election on account of excessive rain. Had the weather been different, the political scientists predicted an opposite outcome.

But in spite of the weather, record-breaking turnout is expected at the New Hampshire primary. New Hampshire Secretary of State Bill Gardner has predicted that two out of every three New Hampshire residents will participate in Tuesday's vote. The State's former Attorney General Thomas Rath is also optimistic, as he told The Boston Globe:

It has snowed here before. We are a hardy lot. This is one of our most prized political possessions. Snow is not going to keep us away. This is a real civic exercise that everybody is involved in.

So it seems that though the weather has the potential to affect turnout, it'll take a little more than a bit of snow to keep New Hampshire voters away from the polls on this important primary election day.