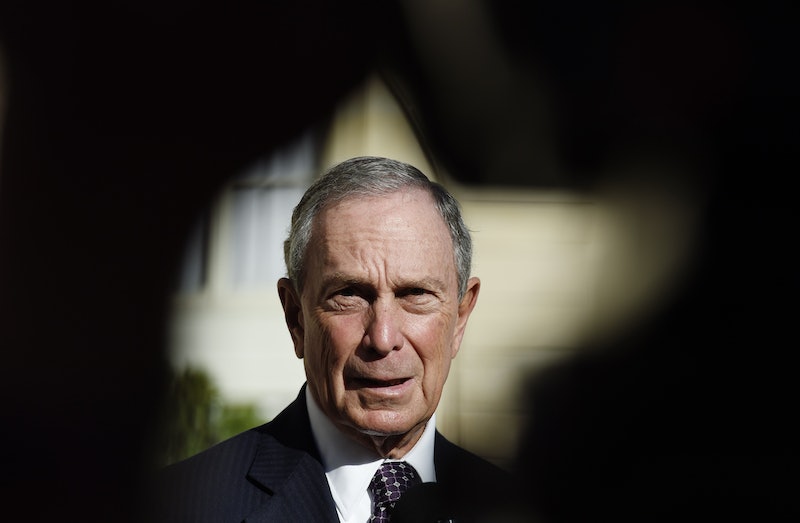 The 2016 campaign for U.S. president is already, in a lot of ways, overcrowded with presidential hopefuls clinging onto the belief that they're just what the country needs. Combine both the Democratic and Republican candidates still in the running, and you're looking at more than 10 men and women itching to make it to the White House. However, with the announcement on Monday that former New York City mayor Michael Bloomberg may toss his own name into the hat, the end to the search for a potential Obama successor seems not to be over just yet. The news is far from groan-worthy, though. Michael Bloomberg said he's considering a 2016 presidential bid, but here's why he's exactly what the election needs.

Bloomberg hasn't in any way confirmed his candidacy, but did say on Monday that he's considering for starting up his own Independent campaign. "I'm listening to what candidates are saying and what the primary voters appear to be doing," Bloomberg told Financial Times in an interview. When specifically asked if he would be joining the race, the CEO said he was "looking at all the options." The statement comes several weeks after the New York Times reported Bloomberg had asked financial advisers to put together a plan and estimate for a 2016 campaign.

Bloomberg also stated in the interview that early March would be the practical deadline for getting his name on ballots across the country so there may be a few weeks still before Americans find out for certain if Bloomberg will be an option for the the nation's commander-in-chief, it's never too early to start thinking about all the ways Bloomberg would make a pretty appealing candidate.

Former Mayor Mike is, in a lot of ways, the best of both worlds. A member of the Democratic Party before running for elected office and a member of the Republican Party while holding office as New York City's mayor, Bloomberg knows what it's like on both sides and doesn't hide his diverse platform on social and political issues. The former mayor supports same-sex marriage and abortion rights, and has said that undocumented immigrants should be allowed access to legalization. He maintains, however, his status as a fiscal conservative and a strong opponent of excessive government spending.

As CEO and owner of Bloomberg L.P., the man is like Donald Trump — if you include all the business experience and get rid of the penchant for constantly making outrageous remarks and insults toward others. On the political side, Bloomberg spent more than a decade in what is generally considered to be one of the most influential and challenging elected office positions in the world, putting him in the same realm as Jeb Bush or Chris Christie, but better. He could probably out-debate any GOP candidate, and even good ol' Bernie, when it comes to foreign policy. When philanthropist is the third title in your triple-threat description, you know you can't be all that bad.

But this existence in the in-between is what could prevent Bloomberg from making it very far in the race, or deciding to run at all.

Lacking an alignment with one of the two major parties is often considered a kiss of death for candidates running for elected office. But Americans will likely be in the wait until post-Leap Day to find out exactly what kind of traction a Bloomberg 2016 campaign can gain this late in the game.