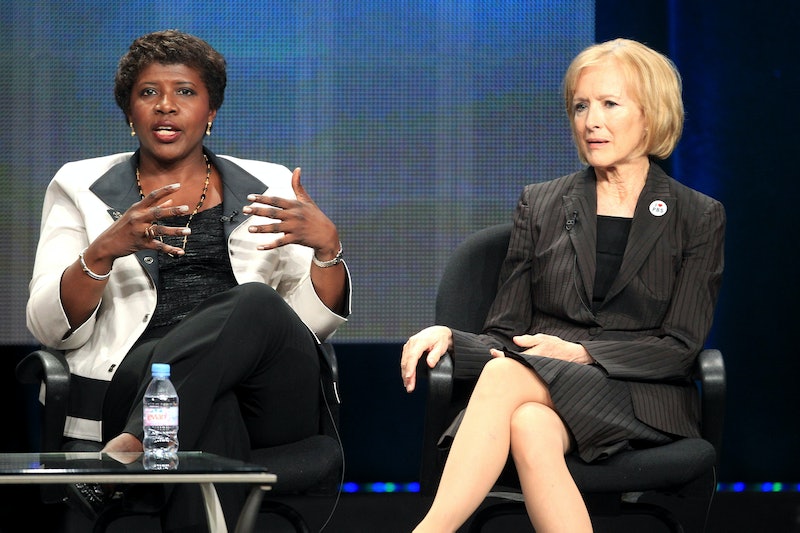 On Thursday, Feb. 11, PBS is airing the Democratic presidential debates out of Milwaukee, Wisconsin, and the station has two outstanding women moderating the event. PBS NewsHour co-anchors and managing editors, Gwen Ifill and Judy Woodruff are taking their questions to the University of Wisconsin-Milwaukee campus, and are ready to throw some good ones at Hillary Clinton and Bernie Sanders in the wake of the New Hampshire primaries on Feb. 9. These women are accomplished in their own respective rights, however, and every feminist watching should get to know them prior to Thursday's debates. Here's why Gwen Ifill and Judy Woodruff will make great moderators in this upcoming event.

Ifill is a journalist, a television newscaster, and the author of a book entitled The Breakthrough: Politics and Race in the Age of Obama. She is also the moderator and managing editor of PBS's Washington Week, and co-anchor and co-managing editor of PBS NewsHour. Woodruff is a television news anchor, journalist, and writer who has worked at several television stations, including CNN, NBC News, and PBS. The pair is more than qualified to moderate this upcoming debate, but here are some of their career specifics and personal achievements to gratify the feminist within each of us.

Woodruff Serves As A Member Of Two Renowned Organizations

Ifill Has Moderated Debates In The Past, So This Isn't Her First Rodeo

Woodruff Worked At CNN For 12 Years

She hosted a show called Inside Politics, and even Ted Turner expressed upset at CNN's decision to let her go, although it was her own decision not to renew her contract.

Ifill Has Received Praise On Her Debate Performances

Gwen set a steady hand, a sound voice and balanced tone through what became a civil debate between two history making rivals. We'd expect nothing less from one of our country's most highly-respected political journalists.

Woodruff Worked For PBS Not Once, But Twice

They must have really liked her!

Ifill Serves In Some Important Positions

Ifill currently serves on the boards of the Harvard Institute of Politics, the Committee to Protect Journalists, the Museum of Television and Radio, and the University of Maryland's Philip Merrill College of Journalism, which mysteriously leaves her enough time to somehow moderate a Democratic debate. One must wonder if she can also control time.

I'm one of three, and let me tell you, we're no picnic. How she held a myriad of jobs and mothered three kids is beyond my comprehension.

For those who don't know, that's widely-regarded as the world's most boring television station, and she accomplished so much without falling asleep.

Woodruff Was Awarded An Honorary Doctorate

She received her honorary doctorate from The University of Pennsylvania for her services to quality journalism.

Her IMDB page is as impressive as most prominent actors, for her numerous appearance on television and in film.

Here it is, plain to see: these two women have led impressive lives and worked lengthy careers, respectively. Thursday's debate is therefore bound to inspire interest in even the least interested of voters, so make sure to check it out at 9:00 p.m. EST on PBS.