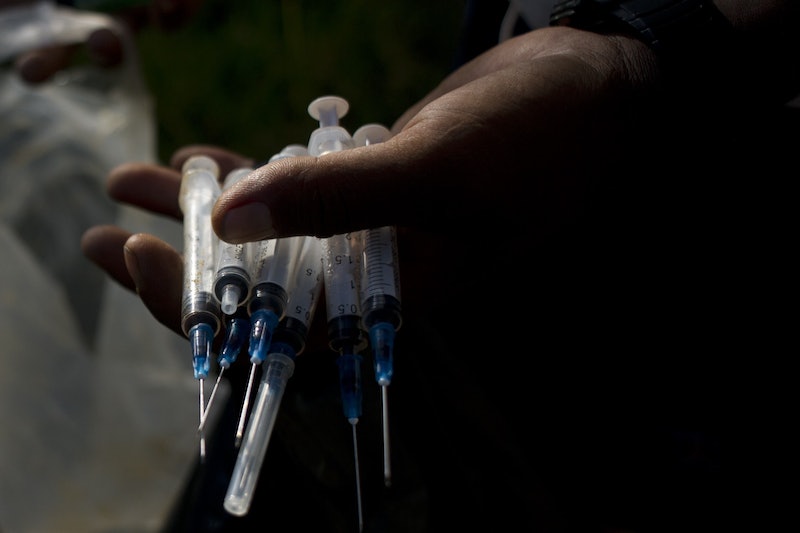 New Hampshire hosts the first official primary election of the United States presidential race on Tuesday, a week after the Iowa caucuses. Polls will be open from 7 a.m. until 7 p.m. Over the course of the last several months, the candidates have debated abortion, immigration, rebuilding the middle class, and who would build a wall on the U.S.-Mexico border. But as the primary kicks off, will the growing heroin epidemic sway New Hampshire voters?

According to the National Institute on Drug Abuse, in 2014, there were more than 10,000 deaths by heroin overdose across the country. Between 2002 and 2013, heroin-related deaths increased by 286 percent, the amount of heroine users across the U.S. doubled, and the mean age of first-time users averaged at 24. While this crisis proves a serious problem at the national level, the abuse is most striking across the Northeast.

In Massachusetts, the rate of opioid overdose deaths more than doubled over a two-year period, and in Maine, heroin overdoses quadrupled from 2011 to 2012. New Hampshire is no exception to the heroin epidemic. There, 48 percent of residents have said that they know someone affected by the drug. In New Hampshire alone, at least one person dies every day from heroin use, with 400 people dying last year. "It is an apocalypse," said Manchester Police Chief Nick Willard in an interview with USA Today.

As you prepare for the start of Tuesday's primaries in New Hampshire, let's take a look at what some of our presidential hopefuls have had to say on the important health issue that is drug addiction.

When it comes to the heroin crisis, Clinton has stated that treating drug addiction is a public health issue, rather than a criminal one. She spoke to a five-point plan that would provide $10 billion to "increase access to treatment by boosting funding for the Substance Abuse Prevention and Treatment Block Grant."

Twenty-three million Americans suffer from addiction, but only 1 in 10 get treatment. Fifty-two million Americans over 12 have misused prescription drugs at some point, including one in four teenagers ... This is not new. We're not just now 'discovering' this problem. But we should be saying enough is enough.

At a debate on Jan. 17, Sanders connected opioid painkillers and heroin addiction, stating:

There is a responsibility on the part of the pharmaceutical industry and the drug companies who are producing all of these drugs and not looking at the consequence of it.

In 2010, 14 percent of people who were dependent on painkillers also used heroin. In 2012, doctors wrote 259 million prescriptions for opioid painkillers — the equivalent of one bottle of pills for every adult in the country — and as the addiction rate to opioid painkillers grew, so did the rate of heroin use.

We cannot have this huge number of opiates out there throughout this country, where young people are taking them, getting hooked, and then going to heroin.

Bush's campaign published a drug control strategy earlier this year on his website, stating that Americans cannot look at addiction as simply a criminal issue or a health issue, because it is more complex than that. Bush has spoken about his daughter's own struggle with drug addiction — she was arrested in 2002 for trying to fill a false prescription.

I visited [Noelle] in jail. Never expected to see my beautiful daughter in jail. She went through hell. When I travel and do my regular job I can just look in someone's eyes and I can just tell, you can just see it.

Bush's strategy combines abuse and addiction prevention, as well as strengthening criminal justice by targeting drug pipelines and supply chains by "exercising effective oversight of pain clinics" and securing the border. His plan also promotes treatment and recovery programs, and nonviolent drug offenders will have the option to seek treatment, rather than face criminal sentencing.

Trump spoke about drug control at the New England Council in November, focusing mostly on immigration and border security. He told the crowd, "we're gonna do the clinics so they can do the clinics, and do them locally so they're locally based and run." He continued:

Although the question of who will build this wall and how still remains.

At Saturday's GOP debate in New Hampshire, WMUR News Anchor Josh McElveen asked about the serious issue of heroin overdoses in the state. Cruz was asked about his absence at a Judiciary Committee meeting in Washington D.C., where New Hampshire senators and Manchester Police Chief Nick Willard testified on the problem of addiction.

Cruz opened up about his family's struggles with addiction, recounting how his half-sister struggled with addiction for many years and died after overdosing on pills:

This is an epidemic. We need leadership to solve it. Solving it has to occur at the state and local level with programs like AA and counseling and churches and charities. But it has to be securing the borders. Mexican cartels are smuggling heroin into this country. We know how to secure the borders.

Rubio spoke about the national heroin crisis last year during a campaign stop in Florida, stating that its use is not only local to New Hampshire, but is a health issue that faces the nation. Rubio said that the FDA should partner with pharmaceutical companies in order to create an alternative to opiate painkillers. The candidate also spoke about substance abuse as a public health issue, and echoed Sanders on the connection between painkillers and heroin addiction, stating:

Drug addiction needs to be treated as a disease — it's not a crime, it's a disease. People suffer from this addiction. Many of the people that are addicted to opiates became addicted using prescription medication that was given to them by a doctor ... and then when that supply was cut off ... they migrated to street heroin which is incredibly dangerous.

While it's notable that most candidates addressed addiction as a public health issue, it is important for them to not use addiction as a justification for tighter immigration control and border security, which plays into the racialized fearmongering that has already been central to GOP politics this election season. Focusing on drug addiction from an immigration standpoint alone also refuses to speak to its importance as a public health issue in the United States — one that was not discussed in such a way when heroin users were disproportionately black. America will see what New Hampshire voters have to say Tuesday, when they cast the first primary votes of the presidential race.