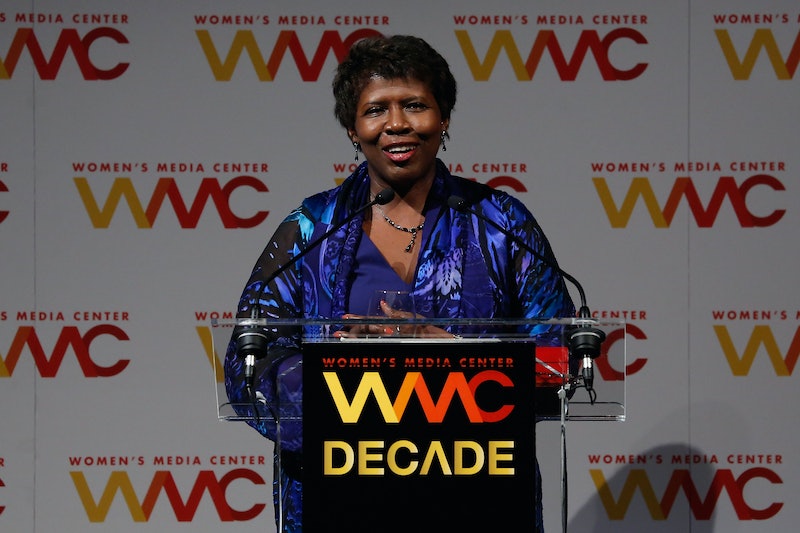 Get ready for another Democratic debate — this one coming just two days after the New Hampshire primary — and, for the first time this cycle, PBS will be hosting. The event will be moderated by Gwen Ifill and Judy Woodruff, two names that might not be familiar to some viewers. So, who is Gwen Ifill?

A best-selling author and veteran reporter, that’s who! Currently, Ifill is the host of Washington Week and the managing editor of PBS NewsHour, which she also co-anchors. Even before coming to PBS in 1999, Ifill had an impressive resume: She was The New York Times’ White House correspondent, NBC News’ chief congressional and political correspondent, and a political reporter at The Washington Post, The Baltimore Evening Sun, and The Boston Herald American.

Needless to say, this won’t be Ifill’s first foray into campaign reporting. She moderated the vice presidential debate between Dick Cheney and John Edwards in 2004, and also presided over the 2008 vice presidential debate between Joe Biden and Sarah Palin. More significant than her past moderating stints, though, was a 10-week live run of Washington Week that she hosted during the 2008 campaign. This involved Ifill traveling to cities across the country and posing questions from local audiences to the panelists on her show. That year, Ifill’s show won a prestigious Peabody Award.

Ifill was criticized last year for a tweet she posted about the Iran nuclear deal. As President Obama was securing the final votes in Congress for the deal, the White House tweeted an infographic purporting to show how much more difficult it would be for Iran to obtain a nuclear weapon once the agreement was finalized. The infographic used a cartoonish image of a bomb to illustrate this point — just as Israeli Prime Minister Benjamin Netanyahu had done earlier to warn of the dangers of Iran’s nuclear program.

Basically, the White House was trolling Netanyahu. Ifill retweeted the White House’s graphic, and added the caption, “Take that, Bibi.” Ifill claimed later that this comment was meant to be a representation of the White House’s argument, but it certainly seemed at the time as if she was aggressively siding with Obama and petulantly insulting the Israeli Prime Minister. She was criticized by PBS’s ombudsman for the tweet, but the incident quickly blew over.

Outside of broadcast journalism, Ifill wrote the best-selling book The Breakthrough: Politics And Race In The Age Of Obama, and is on the board of the Committee to Protect Journalists. She also has over 20 honorary doctorates.

Ifill is an insightful journalist — see her analysis of the 2008 vice presidential debate for proof — and there's no reason to imagine she won't do a stellar job on Thursday night.