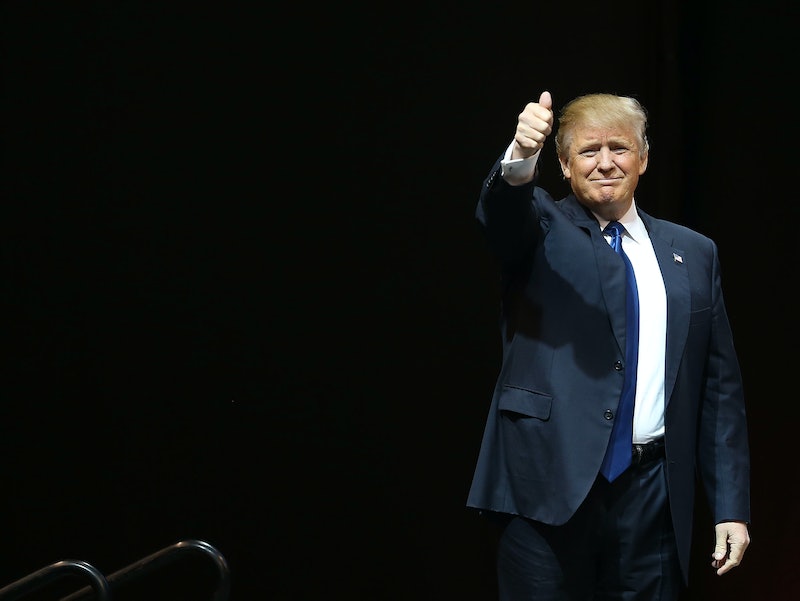 The results of the Iowa caucuses are now (sort of) far in the past, at least for those candidates who didn't fare as well as the polls projected. For GOP candidate Donald Trump in particular, the upcoming New Hampshire primary will appear a blessing, after his unexpected loss to Texas Sen. Ted Cruz in the Hawkeye State's caucuses. And with Trump leading the polls in the Granite State by nearly 15 percent just before the voting stations open, residents and Americans elsewhere alike want to know whether Donald Trump will attend the primary.

The Donald plans to be in New Hampshire on Tuesday. According to the schedule on Trump's official campaign site, the campaign will be holding a New Hampshire Primary Watch Party, which kicks off at 7 p.m. at the Executive Court Banquet Facility in Manchester. In all likelihood, Trump will attend his party, unless Megyn Kelly RSVPs and he bails to avoid getting any "biased" questions from the reporter.

Trump made the rounds across the state in the week prior to the primary, with several stops throughout Sunday and Monday.

Trump made a trip to Plymouth, New Hampshire, on Sunday morning for some breakfast, then moved on to Manchester. But of course, the candidate made sure to take some time in the evening to pause the campaign and show respect for Super Bowl Sunday.

On Monday afternoon, Trump thanked voters via Twitter for coming out to a campaign event in Londonderry. And earlier in the day, residents had the opportunity to hear the Republican frontrunner at a town hall event in Salem.

The billionaire referred to his visit to Manchester's Verizon Wireless Arena Monday evening as his "last lovefest" with voters before they head to polling stations starting Tuesday morning. Trump knows the love he's got in the New England state, and standing up voters on Election Day might just be the last thing he would want to do.

And if you happen to be in the state on Tuesday, know that there's still time to snag a spot at the Trump campaign's watch party — for free. Tuesday night will likely be the last that New Hampshire sees of Trump for a while, since he will be soon be heading to South Carolina, the next state to hold a primary.