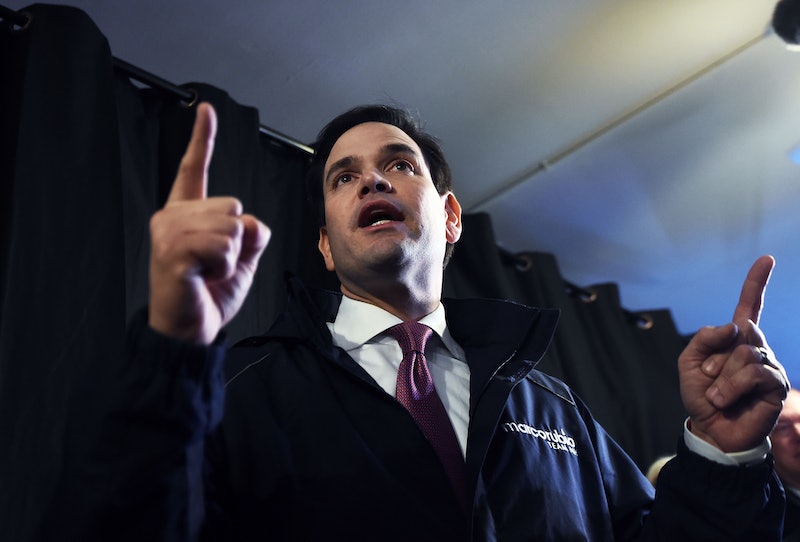 After the last Republican debate, Marco Rubio was widely mocked for repeating the same talking point four times over the course of the evening. It’s looking like this may be something of a trend. On Monday, Rubio short-circuited again in the exact same way, repeating a talking point twice within 20 seconds at a New Hampshire town hall. Is the Florida senator incapable of not doing this?

That pause right before “throats" might indicate that he realized that he had said almost the exact same thing just seconds earlier. The truth is that it wouldn’t have been much of a problem if Rubio hadn’t made an identical mistake two days earlier in front of millions of people.

At Saturday’s Republican debate, Rubio said that we must “dispel once and for all of this fiction that Barack Obama doesn’t know what he’s doing.” The president, Rubio explained, “knows exactly what he’s doing!” Minutes later, he said the same thing, almost verbatim. Then, minutes after that, he said it again.

At that point, Chris Christie tore into Rubio, telling the audience that he knows only how to deliver “a 25-second memorized speech that is exactly what his advisors gave him.” Amazingly, Rubio responded to this accusation by ... repeating the same platitude yet again. The fourth time, for those keeping count.

This quickly gave birth to the “robot Rubio” meme, as well as an unhelpful narrative about the Florida senator. By pummeling him on this at the debate, Christie took what was one of Rubio's strengths — message discipline and slick speeches — and turned it into a weakness. It raised the possibility that, despite all of his hype, Rubio doesn’t actually have as much substance as many in the Republican Party might have hoped or assumed.

Really, though, his collapse wasn’t a surprise. Rubio’s reliance on buzzwords and talking points has been apparent for quite some time, and so has his penchant for repetition. Throw the words “greatest nation,” “American dream,” “history of mankind,” and “new American century” into a blender, and you’ve got a Rubio speech. Extra points if you add a reference to “radical Islamic terrorism,” or something about how the country isn't what it used to be.

We won’t know the true extent of the damage until New Hampshire holds its primary on Tuesday. It’s entirely possible that this is one of those "gaffes" which turn out not to matter much to too many voters. But if they're turned off by Rubio's robotic repetition, it could be a major problem. It could, in fact, be a candidacy-ending problem, simply because he doesn't appear capable of fixing it.