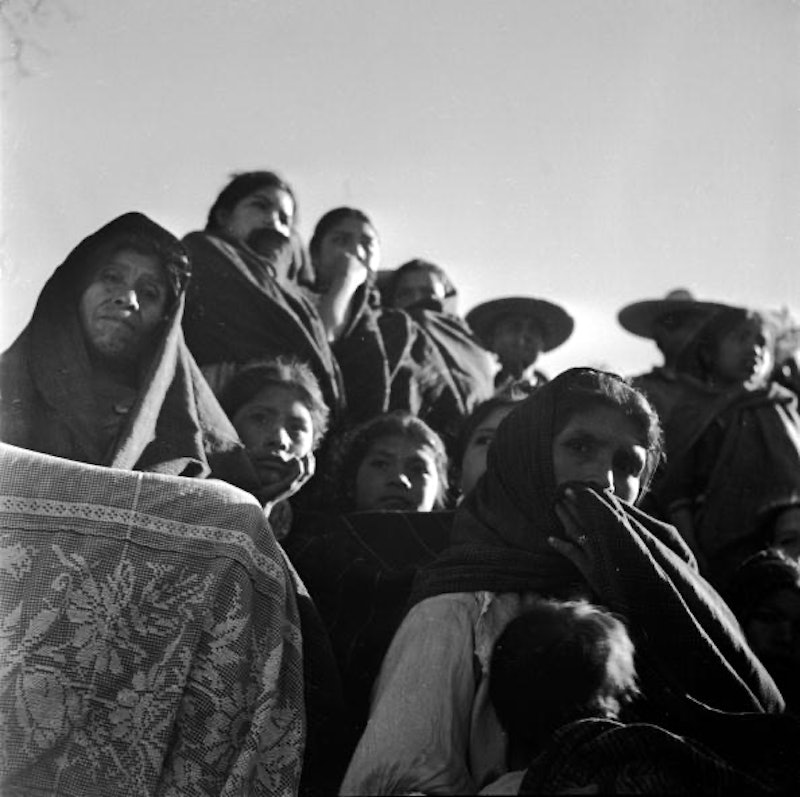 There was a whole lot going on during the 1950s, both in the U.S. and around the world. The decade saw the start of the American wars in Korea and Vietnam, the introduction of rock 'n' roll music, the launch of Sputnik, a spreading fear of communism, America's baby boom, and the growth of the Civil Rights movement. But textbook makers, in their eternal failure to present a thorough look at what actually happened in the past, inevitably left out many pictures of females who were making waves simply by being themselves. So here are 15 archived photos of women of color from the '50s that were almost definitely left out of your history books.

The gallery runs the gamut. You'll see some women doing what they felt they had to do to survive. You'll see others taking part in whatever it was they thought would help them thrive. One commonality among the snapshots is the women's pride and confidence, regardless of whether they're being stereotyped as members of minority groups or being deprived of the respect they undoubtedly deserved. You may not have seen them before, but you'll certainly remember them now.

1. The Tohono O'odham Reservation Shows Off Its Taka Team

A group of Native American women in Sells, Arizona on the Tohono O'odham reservation line up in 1950 before starting a game of Taka, a sport similar to hockey.

This photograph of a trio of women in Chicago doing a makeover in 1957 may look a tad staged, but the scenario represents truth. Women like to feel beautiful every now and then, and makeup has long been one means to achieving that. And there really should be no singular definition of beauty.

Nothing like a casual afternoon bull fight in 1950. These women appear to be rooting for the bull. Or maybe it was a bit too chilly for a battle between man and beast, and everyone just wanted to go home.

4. Korean Woman Stops For A Sip From The Han River

Talk about trailblazing. In the midst of fleeing the conflict zone around Seoul, this woman and her child stop to drink some water from the Han River in 1951. The area around the city played host to a number of battles during the Korean War.

5. A Young Gymnast Practices The Balance Beam At A Chinese Sport School

In the '50s, Mao Zedong set in motion the machine that has produced Olympics-worthy Chinese athletes. Children as young as four years old began training at one of the thousands of sport schools, like this girl practicing with her coach.

Ever heard of ballerina Maria Tallchief? I hadn't either. In 1947, Tallchief became the New York City Ballet's first prima ballerina. A member of the Osage tribe, Tallchief is considered the first Native American to break into the ballet world.

7. Indian Immigrants On The Husband Hunt In Britain

These young women from Calcutta, India are dressed and ready for some 1957 version of speed dating in England. A real keeper? A man who can converse in classy Indian and British accents interchangeably.

Don't forget that in plenty of countries around the globe, it's the ladies who have been and remain the real experts in farming. In this 1956 photo, a group of Mongolian women learn how to operate a Czech-made Zetor tractor.

9. Loving Ladies In Arkansas Take A Look At A Diploma

There's nothing like a proud mama / grandmama / auntie / any female relative moment. Student Ernest Green is getting all the love from the ladies in his life as he shows off his school diploma in Little Rock, Arkansas in 1958.

Is it just crossing a line when the catch is bigger than the fisherwoman herself? This women shows off her 104-pound giant black sea bass near South Coronado Island, California in 1953.

Having been a tennis geek in my elementary school days, Althea Gibson was someone I got to know for a social studies project during my younger years. Not many are as fond of the ace serve as I was, so they're likely not familiar with the tennis/golf pro, who is seen here shaking hands on the court during a 1956 French Championship women's singles match.

12. A Group Of Girls Pose With Their NAACP Pamphlets

The National Association for the Advancement of Colored People was still going strong 50 years after its inception, working toward its mission of ensuring equal rights for those confronted by racial discrimination. Some of the ladies in the photograph, taken in 1959, are holding materials provided by the organization.

Four women (Mary Alexander, Daisy E. Lampkin, Dorothy Height, and Mary White) get together at the Warren Methodist Church in 1958 for a Pittsburgh Council of Negro Women event. Those floral accessories: love.

The more proms change, the more they stay the same. Young guys and gals dance at a junior high school graduation prom in Pittsburgh, Pennsylvania in 1958. The only thing missing from today's dances is more cowbell — a musical accompaniment the kids were apparently getting nearly 60 years ago.

African American women technically gained the right to vote in the U.S. with women's suffrage in 1920, but people of color continued to face great challenges in the voting process into the 1950s. In this photo, a group of men and women stand in line to register to vote before the presidential and congressional election of 1958.

The lives of these women were critical to making the decade what it was. Capturing their daily routines, like sports practice and school functions, or the special occasions, from dancing the night away to happily displaying their biggest catch, should not go unnoticed.