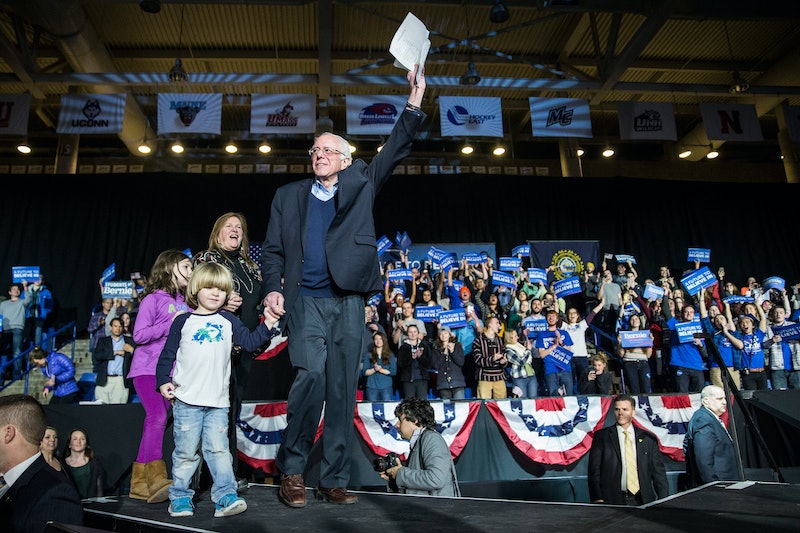 Levi Sanders, presidential candidate Bernie Sanders' son, has largely stayed out of the public eye during his father's run for the White House. Though Levi was instrumental in providing support during Bernie's 2006 Senate campaign, for the most part, no one has seen much of him. Nevertheless, one short comment Levi gave about his dad — or rather, why he's never called him that — sums up Bernie's campaign philosophy, and gives voters a deeper insight into the way the candidate runs his life, both on and off the campaign trail.

During an interview with People Magazine, the Sanders family gathered at their Burlington, Vermont home, with each member helping to shed a piece of the senator's "grumpy grandpa" image. They discussed how no one in the family calls Bernie "dad," but just about every variation thereof. Bernie's wife Jane has three children from a previous marriage. Through the years, they got to know the senator as their mother's boyfriend. Calling Bernie by his first name stuck.

But even Levi, Sanders' only biological child, avoids calling him "dad," and for a pretty significant reason. He tells People:

Though this may seem like an offhand comment, I believe it says a lot about Sanders' campaign and the humanitarian threads that run through it. To have Levi refer to his father as a friend first, as opposed to a sheer authoritarian, reflects on the senator's entire leadership style. First and foremost, he strives to be a friend — to the people, to the poor, to women, to the underprivileged in general.

The Vermont senator's body of work in the legislature demonstrates this same idea of friendship. While an authoritative nature is, in part, necessary to be both a senator and a president, it cannot be the only ruling philosophy. His decades-long stances and voting records on the rights of women and the working class show that he is a friend to both groups.

To borrow a quote from Sanders' opponent Hillary Clinton, he is a friend who "likes to get things done." As voters can see with the way his son perceives him, Sanders can be a friend both to his family and to the people.

More like this
Who Is Nick Cannon Dating & How Many Kids Does He Have?
By Jordyn Tilchen and Radhika Menon
Khloé Kardashian Is Reportedly Dating A Private Equity Investor She Met Through Kim
By Jordyn Tilchen and Jake Viswanath
Adam Devine Hilariously Let Everyone Know He’s *Not* Accused Cheater Adam Levine
By Brad Witter
Romance Authors Are Mobilizing For Reproductive Rights
By Natalia Perez-Gonzalez
Get Even More From Bustle — Sign Up For The Newsletter