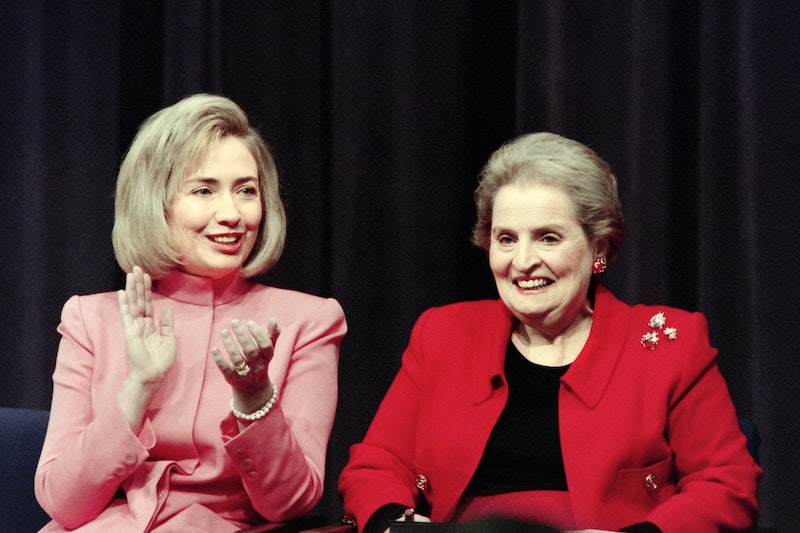 There's an obnoxious trend that's been plaguing many casual conversations about the 2016 presidential race. And if you're a feminist who's even considered throwing your hat in the ring for Bernie Sanders, then you know exactly what I'm talking about. In countless conversations, the mere mention of considering supporting Sanders over Hillary Clinton is met with this: If you're a woman, shouldn't you be voting for the woman?

For a while, this was merely irksome, likely to be overheard in the elevator at work, on the subway ride home, and most definitely in the comment sections on any given Facebook debate. But then a leader whom many a powerful woman admires and reveres joined the chorus. Madeline Albright scolded young women for supporting Sanders over Clinton on Feb. 6 at a rally in New Hampshire. Suddenly, this sexist notion that my voting decision had already been made for me the day I was born wasn't just something that guy from accounting joked about while trying to make small talk at the water cooler. With Albright's comments, the issue has become very real. And frankly, I'm mad as hell.

According to The New York Times, Albright used her famous phrase, "There's a special place in hell for women who don't help other women," to turn young female voters away from the Bernie side:

We can tell our story of how we climbed the ladder, and a lot of you younger women think you have to — it's been done. It’s not done. You have to help Hillary Clinton and Hillary Clinton will always be there for you. And just remember there’s a special place in hell for women who don’t help each other.

I don't have to do anything, and suggesting that I do because of my gender is, well, pretty sexist, actually. Unfortunately, the sting of one of feminism's brightest heroes insisting that as a woman, I must vote for the only candidate who also has a vagina hasn't left me. Nor has the insulting notion that because I'm relatively young, I somehow don't understand that the fight for gender equality has only just begun.

Look, I'm not an idiot, and neither are many of the women considering the pros of a Sanders ticket. Though Albright's suggestion may imply naivety on the part of young female Sanders supporters, I'm pretty sure that even my roommate's dog knows how historic it would be if Clinton were to become president as a result of this election. We get it. And, at least in my case, I support the broad-strokes image of Clinton as president. Of course it's time for a woman to be president — but to be fair, it's been time for a woman to be president since the title was invented.

The fact that I possess the desire to see women finally get a mere taste of the United States' highest office for the first time ever doesn't mean I have to vote for the first viable candidate who also happens to have lady bits.

I also haven't lost sight of the fact that Clinton has been plagued with sexist attacks on her personality, with many claiming that she's too "cold" or "calculated" for voters. You can barely open Twitter or turn on a television without pundits wondering if she can charm voters enough, or whether she's warm enough to be president. As a feminist, I find these attacks on Clinton's ambition and strong-willed approach to her campaign beyond appalling. Shouldn't we be applauding tough, ambitious women instead of feeling threatened by them? (Yes. The answer is a resounding "Yes.") But being offended by unfair discourse surrounding the first female candidate who might actually win this thing is also not a reason to vote one way or another, no more than seeing Sanders being a champ and palling around with Larry David on Saturday Night Live makes him a worthwhile candidate.

Still, when it comes to finally putting my foot in one camp or the other, I'm actually not yet decided. But when I do pick a side, I'd like the opportunity and the breathing room to actually make my own decision. And even if I do end up on Team Hillary, I'll be so much prouder knowing that the decision was truly my own, and not the result of the ludicrous expectation that my gender decides my vote.

And there's a special place in hell for any woman who chooses to shame me for doing just that.