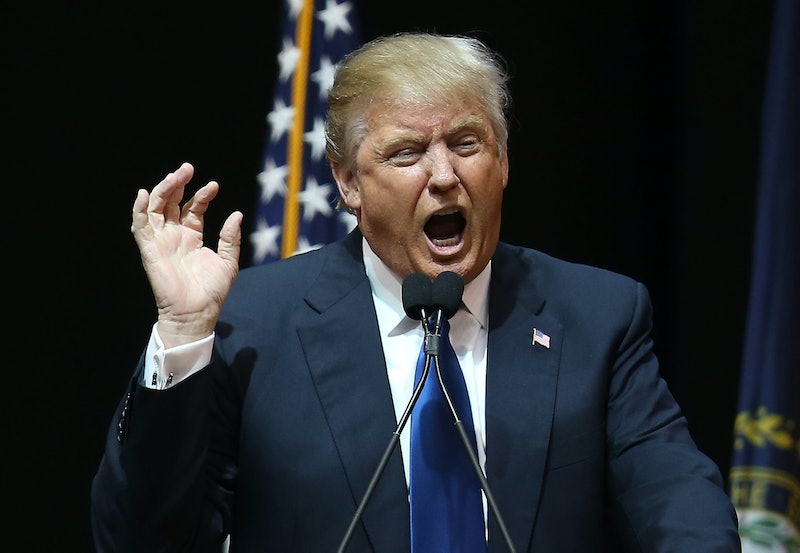 For months, Donald Trump has seemed like the bully on the playground. And on Monday night, he sounded like the ones who used to tease me. I can remember friends and bullies alike who sounded just like Trump, throwing around the word "pussy" like my grandparents might use "holy moly" or "darn it." They didn't understand the seriousness of the slur and its inherent judgment of gay and gender-nonconforming kids, like me. It's been a long time since junior high, but hearing a presidential candidate use the same language is almost shocking.

Or it would be shocking, if it weren't for Trump's previous disgusting attacks on women, Muslims, and even Megyn Kelly. His disregard for inclusive, supportive language is part of his shtick. He's the "un-PC" candidate, here to tell middle America that they've been screwed over by China, immigrants, and Hillary Clinton. So offensive language coming from him perhaps shouldn't be surprising. Yet I'm uneasy. For the record, I do realize that LGBTQ folk have had it comparatively easy this election cycle. Trump hasn't advocated a blanket ban on LGBTQ people entering America, for example.

But the troubling part is that not so long ago, there was a blanket ban — not on LGBTQ people, but on HIV-positive visitors from other countries. The ban was in place for 22 years, and while LGBTQ individuals make up a small percentage of HIV-positive individuals worldwide, here in the United States, the virus will forever be linked to gay men. They were first group to be diagnosed with the "gay plague," or GRID, as it was first called in the 1980s. President Obama ended the ban in 2009.

Over the course of the last seven years and 20 days (but who's counting?), Obama has been supportive of LGBT rights. Andrew Sullivan even called him "The First Gay President." No, he didn't start perfectly. He was late to the party on supporting marriage equality, for instance. But even underneath the original political posturing, it always seemed as though he was a secret supporter.

Between Obama positioning the executive branch as a staunch gay rights advocate and the Supreme Court's legalization of same-sex marriage last June, it seemed like LGBTQ folks were finally being shown a level of acceptance and respect that would be here to stay. It looked like in 2016 we would elect an LGBTQ-affirming woman as president. So in 2024, why not a gay man or a lesbian? It's the progression of more and more inclusive society.

Well, Trump's words are a wake-up call. In using the word "pussy" to insult Texas Sen. Ted Cruz, he attacks Cruz's perceived weakness and negatively connects it with femininity. Trump's argument is that presidential candidates should not be weak, and therefore should not be feminine. If that's the case, we're a long way from electing a woman — and even further from electing a "feminine" gay man.

Maybe that shouldn't be surprising. The Obama era of support has been, to an extent, an illusion that the world we live in is more just and accepting. After all, discrimination in employment and housing is still allowed in the majority of states, more than 20 trans women were killed last year, and a big portion of homeless kids identify as LGBTQ. Maybe official acceptance, inclusion, and respect from the most important elected office on Earth is overblown.

But I don't think so. As much as it hurt to be made fun of as a kid, it's easier to think back on it now, knowing that some junior high kid in Iowa in the same situation today can look to the president of the United States for backup. Trump's use of this hateful language is a good reminder that he or another Republican could win the White House if we're not careful.

It's good to have such a wake-up call. In 2012, the gay vote may have won Obama the election. Let's make sure we do the same thing for the Democrat this year, too. Whether we end up electing a women or an antiwar socialist, that's one step closer to embracing "feminine" qualities, from the playground to the presidency.