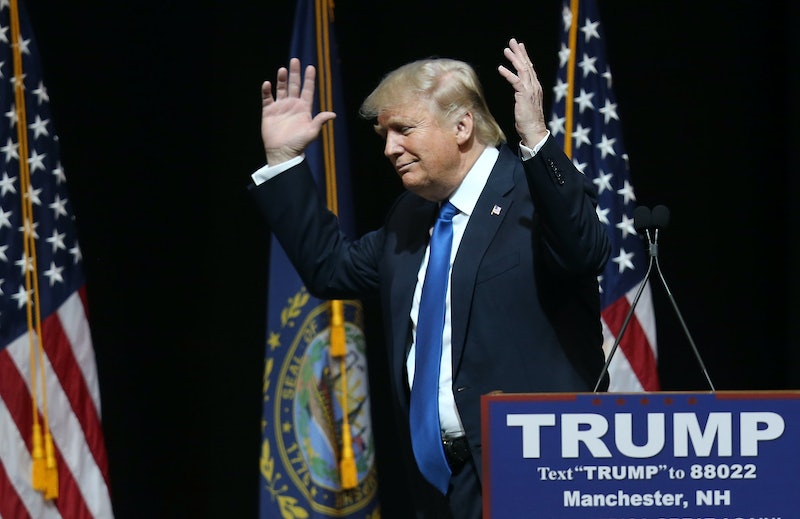 Donald Trump took insult to a whole new level of vulgarity at a Monday evening rally in New Hampshire, during which he used an audience member's shouted insult — "pussy" — to characterize Ted Cruz's hesitation toward the practice of waterboarding. Sure, Trump has become known for inappropriate remarks, and regrettably, none of them have hurt his campaign. Because his statements are intentionally offensive, his latest insult shouldn't come as a surprise. What should be even more shocking, but somehow isn't, is that Trump's female spokesperson has defended him.

The statement was sparked by a conversation on waterboarding that happened during Saturday's Republican debate in Manchester, New Hampshire. During the discussion, Ted Cruz refused to define the waterboarding used during the Bush administration as torture. Although he made the practice seem harmless by referring to it as "enhanced interrogation," he also said that he wouldn't go out of his way to use it on anyone:

It is enhanced interrogation ... It does not meet the generally recognized definition of torture ... I would not bring it back in any sort of widespread use. And indeed, I’d join with Senator [John] McCain in prohibiting line officers from employing it.

Trump, on the other hand, treated the simulated drowning technique as if it were child's play:

Clearly perceiving the point as a great topic of discussion, Trump continued to root for waterboarding during a Monday evening rally, also held in Manchester. While somewhat civilly expressing disapproval for the hesitancy Cruz displayed on the subject at the debate, Trump singled out a woman in the audience and asked her to repeat herself. She had called Cruz a "pussy." Trump put on a show, as per usual, sarcastically chastising the woman for her language as the crowd roared with laughter. Then he repeated her remark over the speakers:

On Tuesday morning, Trump campaign spokesperson Katrina Pierson sat alongside Ted Cruz's senior communications adviser, Alice Stewart, during a CNN New Day interview. As a defense of Trump's words, Pierson referenced the politics of the founding fathers' age — an age when women and minorities couldn't vote, we had slavery, and people fought to the death. The times haven't changed at all, clearly.

When we look at the founding fathers and when they were competing, they said far worse things about each other when they were campaigning. This is nothing new; this is politics. And I'll also say that one of the things that is most appealing about Mr. Trump is that he is breaking that politically correct mold.

According to Pierson, Trump's name-calling is all in good fun. After all, that's what America loves. Fun With Mr. Trump might make a great satirical series for television in the near future, depending on how the election pans out.

It's free speech, and this is the "live free or die" state. Mr. Trump is exercising his free speech. It was in fun with the audience. You heard the whole stadium roar and start chanting. They're having fun with Mr. Trump.

Free speech is fine and dandy, except when it's being exercised carelessly and even mocked by a leader. The first problem is that Trump is taking advantage of the system in his own way. Secondly, his refusal to abide by any sort of moral standard is going to change the entire platform of the Republican party. The Republican platform centers on the concept of individual freedom and minimal government involvement in everyday life. Trump's refusal to draw the line between human decency and hatefulness — "political correctness" aside —is going to encourage the population to act out in ways that will necessitate higher government involvement and oversight. Sadly, the Trump team will never be aware of the ideological contradiction until it's too late.

During the interview, Stewart made a succinct statement about Trump's comment, siding against Pierson and claiming that when it comes down to it, his words were utterly inappropriate, especially for a man in his position:

There are certain words and certain phrases that are just not suitable for running for president.

The woman who initially made the remark about Cruz was tracked down by CNN for comment. She ultimately reflected the same carelessness mastered by Trump:

It just came out of my mouth. It wasn't like I thought about it.