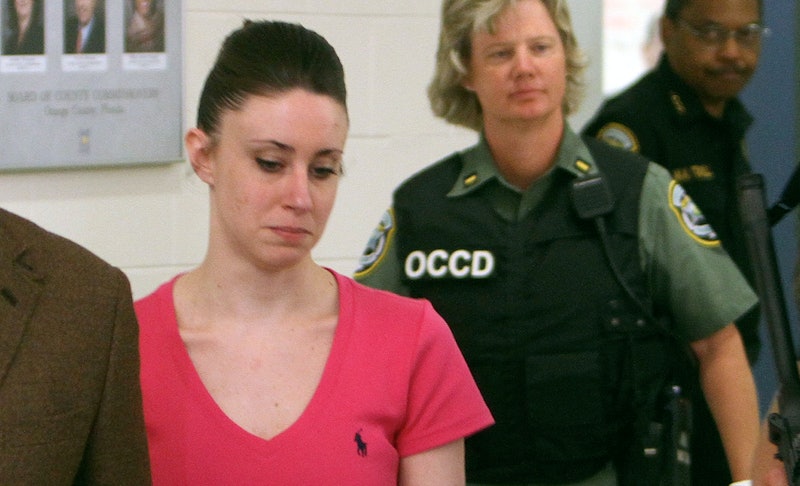 Acquitted of murdering her two-year-old daughter Caylee in 2011, Casey Anthony is making news again in 2016. After having been photographed at a yard sale just over a week ago, she now seems to be moving on to a new chapter of her life as a photographer. Anthony filed papers registering a new photography business with the state of Florida.

According to CBS, Anthony has named it Case Photography and set it up as an LLC. She has already had a few paying clients, according to private investigator Pat McKenna, who worked on her case leading up to the murder trial. The two have been seen together, most recently in shots obtained by The Daily Mail taken on the beach, in which Anthony is snapping photos with her Canon camera. After her trial, McKenna offered Anthony a place to stay in his West Palm Beach home.

McKenna, 67, told local ABC affiliate WPBF that Anthony has "a little bit of talent," and that he has been advising her just to "live her life" since her acquittal. He also clarified that he is not in a romantic relationship with Anthony, and that, given their age difference (she's 29), such a thing would be "repulsive." He also said that he's convinced of her innocence. "Do you think I'd have someone living with me if I thought she had killed a baby?" he told the station.

Anthony was given a rough time of it in the media following the trial, particularly by HLN's Nancy Grace. Grace at one point talked about her "boobs" on the air. Newspapers printed pictures of Anthony dancing while not wearing much clothing while covering the death of her daughter.

Meanwhile, her trial looked at the circumstances of her daughter's death. Anthony had been living with her parents when her mother Cindy reported Caylee missing. The child's body was eventually found in a trash bag near the family home. The defense successfully beat the murder charges, but Casey spent time in jail for making false statements to the police.

Interest in the case is still strong enough that the media has tried to get Anthony to open up. McKenna told press that Megyn Kelly of Fox News reached out for an interview with her just last week. He added that that such a thing is unlikely to happen any time soon.

More like this
Where Is Armie Hammer’s Ex-Wife Elizabeth Chambers Now After 'House Of Hammer'?
By Grace Wehniainen and Radhika Menon
Chris Kaba's Family Continue Fight For Justice After Viewing Police Bodycam Footage
By Sophie McEvoy
These 2 Women Could Be America’s First Lesbian Governors
By Tess Garcia
Jeffrey Dahmer’s Arresting Officer John Balcerzak Got His Job Back After Being Fired
By Grace Wehniainen
Get Even More From Bustle — Sign Up For The Newsletter