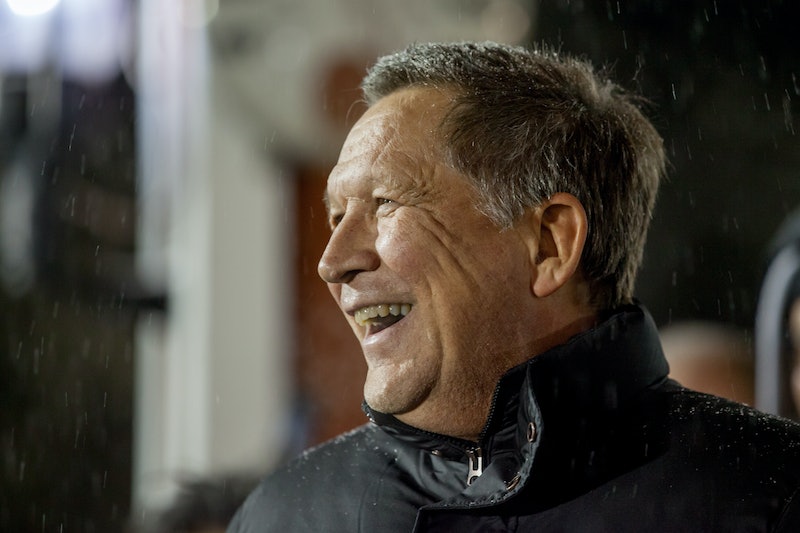 At midnight Tuesday morning, the tiny town of Dixville Notch became the first polling location to report votes in the highly anticipated, hotly contested New Hampshire primary. The winner of the Republican race was John Kasich, with a surprise one-vote victory over presumed frontrunner Donald Trump. Dixville Notch has accurately predicted the statewide winner in the last 10 elections, begging the question: Can Kasich actually win the New Hampshire primary?

This is still a possibility at this point in the race. Kasich was polling third behind Trump and Rubio going into the primary, but Trump's loss in Iowa, as well as Rubio's highly mocked debate performance on Saturday, may have taken both candidates down a peg. New Hampshire has also been hit with a serious case of Trump Regret, according to Politico Magazine. "There’s a common theme running through the complaints you hear here: New Hampshire should be better than this," writes Ruth Graham, who reported on the unease New Hampshirites were experiencing as they approached the primary with Trump still in the lead. That disquiet may catch up with voters at the polls and give Kasich the opportunity to climb to the top of the leader board.

Kasich's reputation as a moderate Republican should be a huge benefit for him in New Hampshire as well. In the last 10 general elections, New Hampshire has gone Republican five times and Democrat five times, which shows a tendency to take the middle ground. Kasich has touted his moderate beliefs throughout his campaign — he's pro-marriage equality, against the deportation of illegal immigrants, and successfully expanded Medicaid in Ohio without cutting benefits.

There's also his more right-wing appeal for the conservative base, and some issues that could specifically help him in a rural state like New Hampshire. Kasich earned an A rating from the NRA and wants to eliminate taxes on small businesses, which make up 96 percent of New Hampshire's employers. For the religious right, he throws in plenty of God-filled rhetoric to pull support from the 79 percent of New Hampshirites who identify as Christian.

A win in New Hampshire would be a huge upset, and a huge victory for Kasich's campaign. The New Hampshire primary has accurately predicted the eventual party nominee in the last 10 elections — either this is the year the streak finally breaks, or this is when Kasich's star really begins to rise.