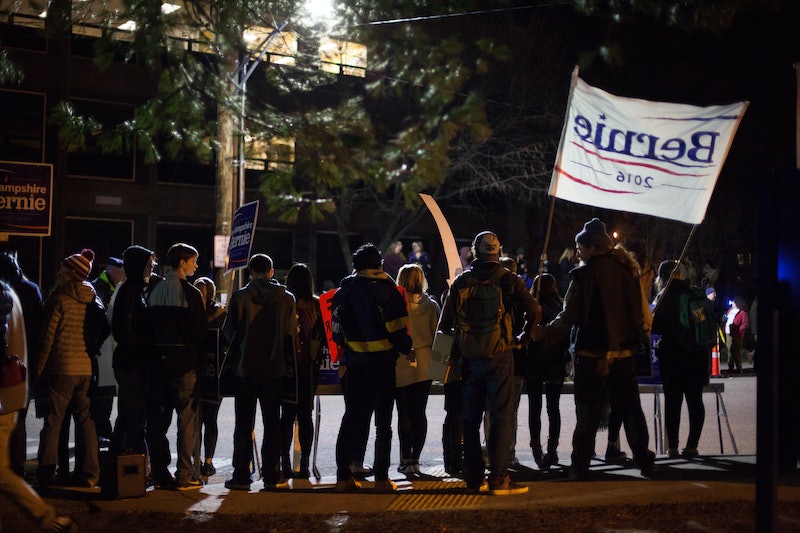 The term "Bernie Bros" has come to describe a contingent of Bernie Sanders' supporters who resort to dirty tactics like assuming that women who support Sec. Hillary Clinton do so just because she's a woman, using gendered language to insult the former secretary of state, and piling on supporters of Clinton on social media — like one blogger who called Clinton supporters a "high-school clique," according to Vox. Are Bernie Bros hurting Sanders' campaign? If the senator adopted or inspired any of the Bros' methods, they would likely do damage to his bid. Sanders' criticisms of Clinton aren't at all in sync with the Bernie Bros, but does he still bear some responsibility for the actions of his supporters?

The Clinton campaign has recently begun suggesting that Sanders has something in common with the Bernie Bros' style of attacking Clinton. At a Bloomberg Politics breakfast Thursday, Clinton's national press secretary Brian Fallon said of the Bros' assaults on Clinton supporters online:

It can be nasty. It can be vitriolic. And I think that the Sanders campaign needs to beware the extent to which, in an effort to mobilize and galvanize their supporters, they start to let the mentality or the crudeness seep into their own words and criticisms that they hurl at Secretary Clinton.

Nastiness and vitriol have hardly been components of any of the debates, town halls, forums, or interviews on the Democratic side. The two candidates have run admirably clean campaigns against one another, abstaining from the type of name-calling and cruelty often exhibited on the Republican debate stage. At the Democratic town hall on Feb. 3, the night before her campaign began suggesting Sanders was getting nastier, Clinton said she was "very proud of the campaign that Senator Sanders and I are running. I mean, we really have focused on issues."

Sanders has pointed out that he doesn't take money from Wall Street, but Clinton does; he has pointed out that he voted "No" on the Iraq war, and she didn't. He has pointed out a number of differences between his policy positions and hers, because this is an election, and she is his opponent. At the debate on Feb. 4, Sanders made a point to note both at the beginning and the end that he has great respect for Clinton. No gendered language or attacks on Clinton's supporters have come out of the Sanders campaign.

But the question arises: To what extent is the politician responsible for the supporter? Certainly, there is some responsibility there. Just look at Donald Trump — his Islamophobic and anti-immigrant rhetoric has been linked to acts of violence against Latinos and Muslims. But in the case of Sanders and the Bernie Bros, there is nothing in Sanders' campaign that the Bros' actions are encouraged by. They're bringing their sexist and crude attitudes to the table, not taking their cue from Sanders.

In this case, Sanders' responsibility is to condemn the Bros' behavior, and he has done so. On Sunday, he told CNN that the Bernie Bros' behavior is "disgusting," and added: "Anybody who is supporting me that is doing the sexist things — we don't want them." Flat-out telling a contingent (however large or small) of your supporters to take a hike at the start of primary election season was a pretty bold move, but Sanders has long supported gender equality, and the Bernie Bros' tactics have no rightful place in his revolution.

Sanders has a responsibility not only to condemn crude behavior among his supporters, but to work to change it. He has done this as well. His rapid response director Mike Casca released a tweet imploring Sanders supporters to be respectful toward those with whom they disagree.

Sanders may yell a lot — about income inequality, corrupt campaign finance, etc. — but he has been a consistent example of civility toward his competition throughout this race in particular, and in his politics generally, with his message of uniting people around common interests, working against a divisive and polarized political climate. The Bernie Bros should not pose a risk to Sanders' campaign.