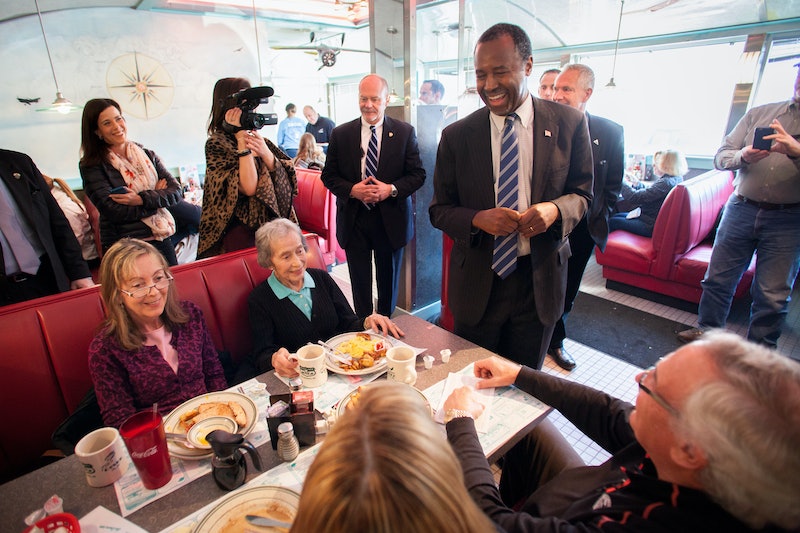 As results from the New Hampshire primary begin rolling in Tuesday night, we'll see a flood of analysis covering the candidates, campaigns, and results from a variety of angles. Not only how the candidates perform, but what factors contributed to their performances will be important questions to answer. Since the Republican candidates have implemented very different campaign strategies in New Hampshire leading up to the primary, the 2016 race in particular prompts a couple questions: What is "retail campaigning," and how effective is it?

The phrase "retail campaigning" refers to a style of campaigning that involves face-to-face interaction between politicians and voters. It's the strategy of the baby-kissing, hand-shaking, backyard barbecue-attending candidate, explained Stephanie Brookes, a journalism lecturer at Australia's Monash University, for the site The Conversation. Retail campaigning involves putting oneself in direct contact with the people where questions can be asked and concerns can be heard directly. This may occur in public places such as diners, or in more organized intimate settings such as town halls.

Associated Press writers Kathleen Ronayne and Steve Peoples reported that New Hampshire is in a unique position to test the value of retail campaigning in 2016, since the likely winner of the primary, Donald Trump, has not made it a priority of his campaign. Trump has spent less time in New Hampshire than any of his Republican contenders, Ronayne and Peoples wrote, and he has eschewed the more traditional up-close-and-personal appearances in the state for his signature mega-rallies. Yet polls leading up to the primary showed Trump to have double the support as the second-place choice, Sen. Marco Rubio.

Would a Trump victory on Tuesday signal the declining value of retail campaigning? Not necessarily. University of New Hampshire political scientist Dante Scala told the Associated Press that the direct contact method may not be very successful for the other Republican candidates — Gov. John Kasich, Gov. Chris Christie, and Gov. Jeb Bush in particular — simply because there are so many of them; they appeal to a similar base and split the vote among themselves.

Trump's primary performance on Tuesday will likely have more to do with the general independent streak of voters in the Granite State — its motto is Live Free or Die, after all — than with his campaign strategy there. New Hampshire voters often go for the candidates perceived as least tied to their parties' establishments, according to Howard Fineman at The Huffington Post. There will always be voters who love face time with candidates. The intimacy of retail campaigning is important for allowing candidates to be seen as fellow human beings as opposed to characters on a TV show. Trump's likely success in the New Hampshire primary does not necessary mark the demise of this campaign strategy in American politics.