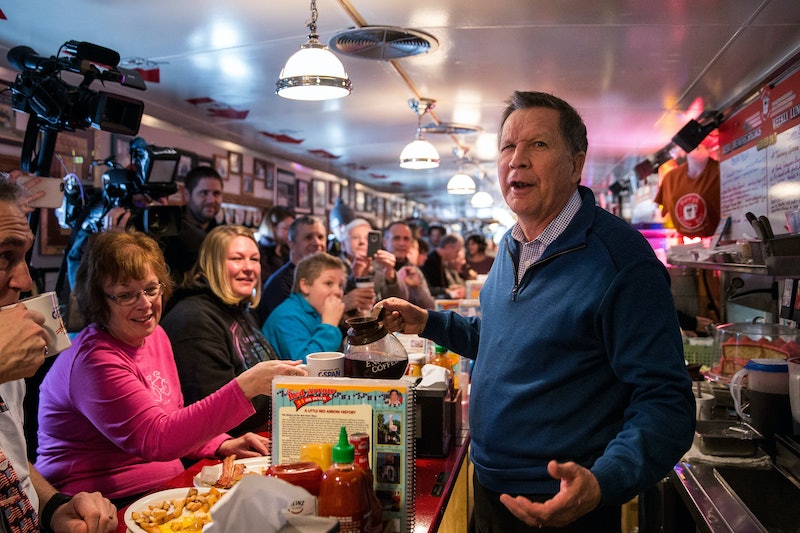 Tuesday's primary in New Hampshire has been very important for Gov. John Kasich. He made more appearances in the Granite State than any other Republican candidate, according to The New York Times, and Kasich's New Hampshire strategy has shaped his campaign. Town halls are central to Kasich's strategy; the Times reported that the governor has held 102 town halls in the state. Unlike many of his fellow contenders, Kasich left Iowa days before the caucuses on Feb. 1 to settle in for campaign events in New Hampshire leading up to the Feb. 9 primary, NPR reported. Why has the governor staked his hopes on New Hampshire, and what will Tuesday's results mean for his campaign going forward? Update: Kasich is projected to come in second in New Hampshire, behind confirmed winner Donald Trump.

Earlier: In January, The Boston Globe appealed to New Hampshire Republicans — who tend to lean more moderate than their cohorts around the country — to vote for Kasich in the primary. Kasich is one of the more moderate Republicans in the race. The Globe noted that Kasich has avoided inflammatory remarks about Muslims and immigrants, showed support for body cameras on policemen, and accepted expanded Medicaid as Ohio's governor under the Affordable Care Act, among other moderate stances that distinguish him from his competition. In a race dominated by far-right conservatism on the GOP side, Kasich has a chance to stand out and perform well in the political climate of New Hampshire.

Kasich has been polling in the double digits fairly consistently in the state since January; that might not sound like a big deal, but he's pretty much neck and neck with Sen. Marco Rubio, Sen. Ted Cruz, and Gov. Jeb Bush for the second-place spot on Tuesday. Though Kasich has told supporters he will drop out of the race if he doesn't do well in New Hampshire, he clarified in a Fox interview that not doing well means for him landing in "seventh place or something," and that's almost surely not going to happen.

Though Kasich will probably be sticking around the race for a while, ABC News exit polls on Tuesday temper the hopes that he will land a strong second-place lead. The polls found that a record number of Republicans are self-identifying as "conservative," with two-thirds supporting a ban on Muslims entering the U.S. and 40 percent supporting the deportation of illegal immigrants, positions Kasich strongly rejects. Still, the polls' results may not accurately predict the outcomes of the primary, and Kasich remains in the game at this point.

If Kasich doesn't have a strong showing in Tuesday's primary, he is not likely to get the boost in name recognition, media coverage, and perceived viability that he would need to be competitive in upcoming contests. But the focused attention he's shown to New Hampshire throughout the race may very well land him in second place, giving his campaign a much-needed bump.