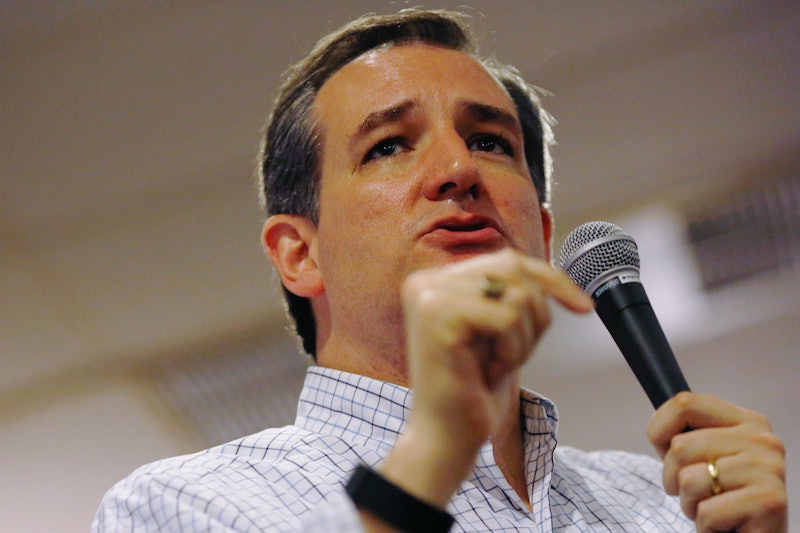 After an unexpected win in last week's Iowa caucus, Ted Cruz has campaigned for the New Hampshire primary on the promise that he and his team will be able to capitalize on the momentum gained in the Hawkeye State. This doesn't mean he was expecting to come out on top, however — a solid performance would place him in a more than fair position to take on the rest of the primaries. Though a very early snapshot of the evening's results saw Cruz, Donald Trump, and John Kasich leading the pack among Republican voters, the evening ultimately ended with Trump on top and Cruz in third place. Despite this loss, Cruz's New Hampshire post- primary speech shows he's gearing up for the long-haul.

Cruz finished slightly above the middle of the pack, in third out of eight Republican candidates. He was relatively close to a second place finish, polling at a 11.5 percent behind John Kasich's 15.9 result. But as CNN writer Theodore Schleifer points out, Cruz was not necessarily petitioning in the state for a win. Through his tour in New Hampshire, Cruz's calm demeanor suggested he didn't want to pull any risky moves to place higher. Instead, he was focusing his efforts on a campaign that will see steady growth and continue to climb through the race. His speech after the primary suggested the same, hitting again and again on the theme of perseverance:

The talking heads of the Washington insiders were confident that our wave of support would break against the rock of the Granite State. That a conservative, we were told, could not do well in the state of New Hampshire. We were told that over and over again. And tonight the men and women here in all across this great state proved them wrong.

Much like many of the other candidates, Cruz also used his speech to distance himself from the "Washington establishment," despite being heralded as a more establishment choice than the current GOP front-runner, Donald Trump. He was careful to include talk of a "conservative grassroots" movement, perhaps drawing from the success of his top liberal opponents Hillary Clinton and Bernie Sanders and their ties to grassroots initiatives. He addressed this faction of the party:

The real winner [of the night] is the conservative grassroots, who propelled us to an outright victory in Iowa and to a far stronger result and outcome in New Hampshire than anyone had predicted. ... In Iowa, in New Hampshire, and all across the nation, we are seeing the old Reagan coalition coming together.

Cruz's speech also made a surprising, bipartisan call for support. He wants to enlist the help of "Reagan democrats" (a traditional Democrat who voted against party lines for President Ronald Reagan in the '80s) in order to secure the nomination. He told his supporters that their vote is necessary to take the White House.

If Republicans are going to win in November 2016, and we have to win for the sake of our kids and our grandkids, we have to welcome home the Reagan Democrats.

Cruz stressed that it would be this support that would throw his campaign into victory. By calling on Democrats, the Texas senator hit both main points home yet again: he established himself as an "outsider" who was willing to persevere beyond party lines to get the nomination. (Though perhaps just as fitting to the candidate, Cruz's speech did end with a call to donate to his campaign via text message.) Whatever the case, Tuesday night showed Cruz is in it for the long haul.

Cruz's full speech can be seen below: